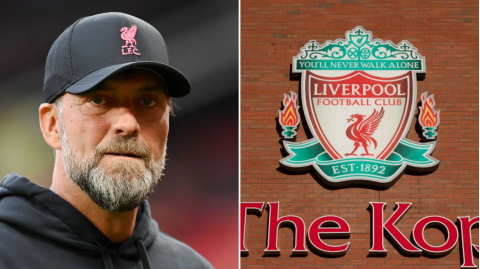 The Reds have established themselves as one of the best teams in the world under Klopp, winning the Champions League in 2019, Premier League in 2020 and both the FA Cup and League Cup last season.

That level of success seems a long way away this term, however, with Liverpool just eighth in the English top-flight after 11 Premier League fixtures.

Klopp’s side are already 12 points adrift of leaders Arsenal and 10 behind defending champions Manchester City.

Sherwood believes Klopp is coming to the end of his cycle at Anfield and does not expect the German to still be in charge of Liverpool next season.

Speaking on The Kelly and Wrighty Show, the former Tottenham and Aston Villa boss said: ‘The problem Liverpool have got is this team is used to challenging for titles.

‘It’s gone for them this season, they’re not going to win the Premier League, so where’s the motivation and drive from the players?

‘The club will say they cannot be out of the Champions League but it can be tough for players when they’ve challenged for titles and all of a sudden it’s taken away from them. I think it’s very difficult for them.

‘I don’t think Jurgen Klopp is there next season, I think there’s a conversation to be had. I’m not sure Jurgen picks them up from where they are and makes them challengers again, I really don’t.

‘History says he doesn’t do that. He’s very good and drives teams all the way. But it’s going to be a fight to get in the top-four now. If they miss out on the top-four it’s a rebuild, a total rebuild.

‘I don’t think they’ll sack him but there will be a conversation where both parties agree that Jurgen has taken them as far as he can and they go for a new challenge. That’s just my hunch when I look at him and the team.’

Klopp, who joined Liverpool in 2015, failed to make it to an eighth season at his former clubs Mainz and Borussia Dortmumd.

But speaking earlier this month, Klopp rejected claims Liverpool’s underwhelming form is down to his management style creating a seven-year cycle.

‘The situation was really different,’ Klopp said. ‘A seven-year spell was not planned or because I lost energy.

‘I was a manager at Mainz and, after three years, we got promoted to the Bundesliga then three years later we got relegated.

‘We tried one more year and the club needed a change, players left us for the Bundesliga so they needed a fresh start.’

Klopp added: ‘I can understand that I left after seven years and now we are in a difficult situation, but, if you think twice about it, you realize the situation is completely different.’