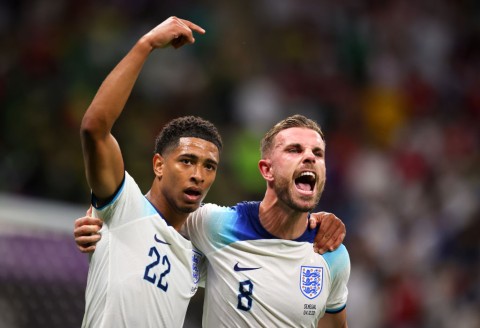 Bellingham, who has been linked with a move to Liverpool next summer, produced a fantastic performance on Sunday as the Three Lions beat Senegal 3-0 at the World Cup to set up a quarter-final against France.

The 19-year-old Borussia Dortmund star set up Henderson’s opener to become England’s first teenager to assist a goal in a knockout game at the tournament.

The goal also saw Henderson, 32, become England’s second-oldest ever World Cup scorer after Tom Finney against the USSR in 1958.

‘Brilliant performance today,’ Bellingham told ITV about Henderson. ‘I’ve seen some of the rubbish written about him playing and it’s ridiculous.

‘He’s so underrated, technically. And he’s delivered again in a big game with a massive goal. So I think it’s time he gets a bit of respect.’

Quizzed more generally about England’s 3-0 victory over Senegal, Bellingham added: ‘The first 35 minutes were tough – they were compact and tough to get through, with really high-energy.

💬 "I see some of the stuff written about him, it's ridiculous. He's one of the most underrated technically."

‘They got in a few times down the sides so it was one of those games where we knew we had to get the first goal.

‘The goal was really well worked down the left-hand side with a few flicks.

‘When H (Harry Kane) drops deep I know he can find anyone on the pitch so I timed my run right.

"I haven't seen a young midfielder play like that for years!"

"The kid has everything!" 🤩

‘When I get into those areas I’m always confident and the boys take up great positions.’

‘We have shown great maturity throughout the tournament. Mentality was top from the beginning and scored three good goals.

‘Three clean sheets in a row are really important for us too.’