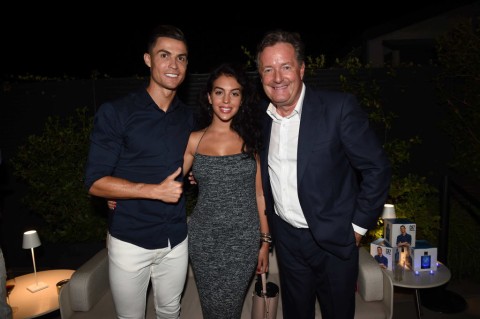 Piers Morgan believes Cristiano Ronaldo would fire Arsenal to the Premier League title and feels there is little chance of him returning to Manchester United after the World Cup.

The Portuguese forward sat down with Morgan for a 90-minute interview which will air later this week, though a number of quotes and clips have already been released in which he hits out at United’s hierarchy and says he will ‘never respect’ Erik ten Hag.

Ronaldo was axed by the Dutchman for refusing to be subbed on against Tottenham last month, as well as fined two weeks’ wages, and his latest comments will likely go down like a lead balloon at Old Trafford.

Morgan has repeatedly slammed Ten Hag’s treatment of Ronaldo and still believes the 37-year-old is the best player in the world, even claiming now that Arsenal – the club he supports – should sign the five-time Ballon d’Or winner in order to bolster their title credentials.

When one user implied that Morgan would not be so keen to see Ronaldo playing up top every week for the Gunners, he replied: ‘Yes [I would], actually.

‘He’s exactly what we need. Cristiano and Gabriel Jesus would take us to the title.’

Ronaldo’s interview was published in part in Morgan’s column for The Sun, with the former GMB presenter suggesting that there could be no way back for the Portuguese superstar at United after his bombshell interview.

He wrote: ‘He wants people to understand what he has experienced this year, and to hear it directly from him, not through ill-informed rumours.

‘The interview, as viewers will see, is jaw-dropping because we so rarely see or hear him like this.

‘I’m not sure how this saga ends, other than it’s hard to see how Cristiano Ronaldo can return to Manchester United after this.’

He continued: ‘He’s a very smart, likeable guy who has given a lot of careful thought to doing this interview. I’ve felt the frustration and anger building inside him for many months.

‘Ronaldo takes his football very seriously — and winning even more seriously. You don’t get to have all the trophies and records he has without possessing a ferociously strong and resilient mentality, a relentless work ethic, a stupefyingly intense competitive spirit, and an unshakeable self-confidence that you’re No 1.

‘For someone like Ronaldo to suddenly find himself at a club that isn’t competing for top silverware, and where he has been dropped, benched, snubbed, scolded and even last month, for the first time in his career, suspended, has hit him hard.

‘Not least because last season he was the club’s leading scorer with 24 goals. He doesn’t expect any special treatment, but he does expect to be treated with the respect he feels he has earned.’