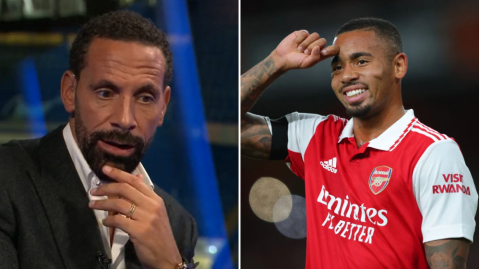 But the goals have dried up for Jesus, who has failed to find the back of the net in his last seven appearances for Arsenal.

Despite this, former Manchester United and England defender Ferdinand still views Jesus as the most important member of Mikel Arteta’s squad.

Arsenal have enjoyed their best ever start to a league campaign and returned to the top of the Premier League on Sunday after thrashing Nottingham Forest 5-0 at the Emirates.

Speaking on the Vibe with Five YouTube channel, Ferdinand said: ‘Do you know what? I listened to the manager [Mikel Arteta] the other day before this game [against Forest].

‘He basically said: “we need our strikers scoring if we’re going to be successful… we need them to score”. That’s a fact.

‘Listen, I still believe he’s Arsenal’s most important player by the way. Without him, Arsenal are not the same team. But he just needs to add goals now. You can’t criticize anything else he’s doing.’

Arsenal legend Ian Wright felt Jesus’ failure to score was the only disappointment from the Nottingham Forest thrashing.

He said: ‘Arsenal need goals. They need goals from wherever they can get them from. Unfortunately for Forest, we gave them a bit of a beating today, but that’s what we need.

‘We need people getting in the box, taking opportunities to shoot and score. We’ve got five goals today and our centre-forward [Gabriel Jesus] hasn’t scored.

‘Everybody is talking about it. You’re hoping it’s just something… He’s got a couple assists, but we want our centre-forward scoring as well

‘Jesus had a very good chance [in the game]. He’s got to hit the target there. He’s just in that form at the moment. He looks a little bit clunky.

‘He seems to be attracted to the ball. There’s no reason for him to do that. I’d rather he stayed up there [leading the line].

‘We’ve got enough players to do that. He can make runs. That’s where you want him.’

Jesus will look to end his goal drought this week as Arsenal host Zurich in the Europa League and face London rivals Chelsea at the weekend.