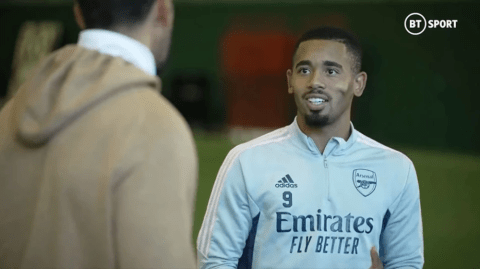 Gabriel Jesus has opened up to Rio Ferdinand about his special bond with Arsenal fans, who he feels are ‘different’ to Manchester City supporters.

Jesus arrived at the Emirates from City in a £45m deal this summer and has helped Mikel Arteta’s side climb to the top of the table after eight games.

The 25-year-old Brazil international striker has scored five goals and provided three assists in that time.

He has been widely praised by pundits for his displays, with Alan Shearer lauding Jesus for his ‘relentless energy’ and ‘willingness to run in behind defences’ while Gabriel Agbonlahor feels he was a better summer signing than Erling Haaland.

Speaking to former Manchester United defender Ferdinand in an interview for BT Sport, Jesus spoke about the difference between Arsenal and City supporters.

‘In the first days when I signed here I went to a Brazilian restaurant,’ Jesus said.

‘I was waiting in my car outside, and a lot of Arsenal fans came to say welcome to the club.

"In the first days when I signed here I went to a Brazilian restaurant, and a lot of Arsenal fans came to say welcome to the club." 👋 @gabrieljesus9 opens up to @rioferdy5 about the special bond he's already made with the Arsenal fanbase 🫶#RioMeets pic.twitter.com/e5sWtWn64E

‘It is different at Manchester City of course. City have had a lot of impact in the last 10, 15 years. Arsenal before that had a lot [more]. It’s different, you know.

‘I feel that welcome, the way they come to talk to me. They are supporting you to the end. Exactly [it gives me confidence].

‘I was happy with the fans at City as well, but it’s different.’

"If I want to score goals, I have to arrive in the box."

"But sometimes I understand I can create for other players."

Number 9 or an all-round forward? 🤔

Ferdinand also quizzed Jesus if he saw himself as a No.9 or more of an all-round forward.

‘It’s a good question because I cannot answer your question properly cause I want to score goals,’ he added.

‘But sometimes I can create for other players as well. I’m not [Kevin] De Bruyne, I’m not Martin [Odegaard], I’m not [Granit] Xhaka, but I can drop and help as well.

‘The difference sometimes is about the manager. Sometimes I drop at City, but now I play more frequently and then I think you feel free, you just go there.’