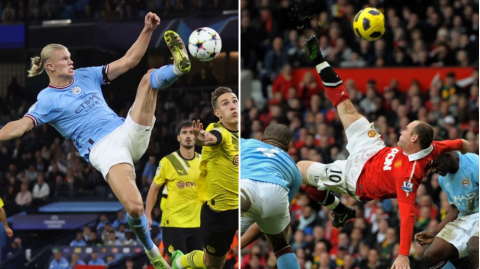 Wayne Rooney has revealed how Manchester United can stop Erling Haaland from scoring when Erik ten Hag’s side travel to Manchester City on Sunday.

Ten Hag’s side travel across the city for the first Manchester derby of the season, looking to register their fifth Premier League victory in a row.

United look revitalized under the Dutchman since losing 4-0 at Brentford in August, going on to record impressive wins over Liverpool and Arsenal.

But Pep Guardiola’s champions look strong too, having not lost a game from their opening seven, and are five points ahead of United having played one more.

Haaland has scored a remarkable 14 goals across his first 10 games for City in all competitions, after joining from Borussia Dortmund in the summer.

The 22-year-old has registered 11 of those goals from seven Premier League games but United legend Rooney feels there is a way his old side can stop Haaland.

‘Of course, City have added Erling Haaland to their mix and put a lot of balls into the box now,’ he told The Times.

‘I’m sure Ten Hag will be telling his full backs and wide players to stop crosses and I think that is where the match will be won and lost – if United can play Haaland out of the game, they’ll have a big chance.

‘But it’s easier said than done. You have to stop Kevin De Bruyne and I have a feeling Riyad Mahrez will be a big factor in this game.

‘I think Pep Guardiola will start with him. With United having a left back, Tyrell Malacia, who is left-footed, I can see Pep using Mahrez on the right to try to come inside and expose Malacia on his right foot.

‘I’ve spoken before about my admiration for Guardiola. I think he has to be one of the very best ever.’