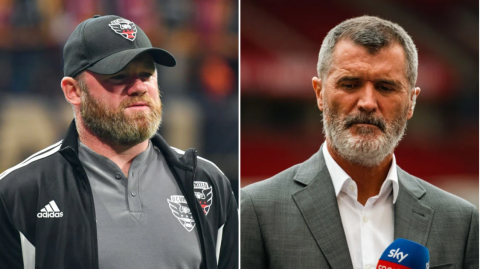 Last month, the 37-year-old refused to come on as a late substitute in the Red Devils’ 2-0 win over Tottenham and instead stormed down the Old Trafford tunnel before the match was finished.

Ronaldo – who tried to force through a transfer in the summer – had also left a pre-season friendly early so Ten Hag felt he had no choice but to axe the five-time Ballon d’Or winner and make him train with the youth team, while he was also fined two weeks’ wages.

Despite Ronaldo’s apparent lack of professionalism, Keane – who had a reputation for demanding the highest standards as a player – jumped to his former team-mate’s defence and has been adamant that United are a better side when the veteran forward plays.

Speaking on Sky Sports, Keane said at the time: ‘He’s obviously had enough. He’s lost his head and I think it’s been brewing over the last few weeks with Ronaldo.

‘But I will still try and defend him. He’s a human being, he’s got flaws. He probably feels frustrated that he’s not been getting opportunities and he’s had enough.’

Ronaldo has now been reintegrated back into the United fold after serving his brief exile and Rooney feels Ten Hag has managed the situation well, while he took aim at Keane for what he perceived as double standards.

Asked about Ronaldo’s behaviour, and whether United are a better team with him in the side, Rooney told talkSPORT on Friday: ‘No, I don’t think so.

‘I think the career he’s had, him and Lionel Messi are probably the two best players of all time – and you can go either way with that [which one of them is the greatest], whichever way you decide.

‘But I just think the things he’s done from the start of the season really are not acceptable for Manchester United.

‘So it’s a distraction that Manchester United don’t need at the minute, they’re trying to rebuild.

‘And for Cristiano, just put your head down and work and be ready to play when the manager needs you.

‘If he does that, I think he’ll be an asset. If he doesn’t, I think it will become an unwanted distraction.’

Ronaldo was not in United’s matchday squad for Thursday’s Carabao Cup win over Aston Villa due to illness but is expected to return against Fulham on Sunday – the final match before the season breaks up for the World Cup.