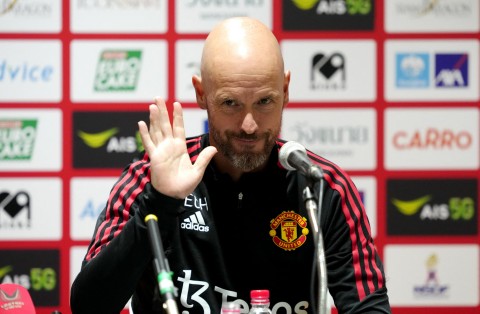 The Red Devils beat Cypriot minnows Omonia 3-2 in the Europa League during the week but even that turned out to be an edge evening for a United side still trying to gel under Ten Hag.

Everton only just avoided relegation to the Championship last season but Frank Lampard’s side look a different proposition this term, losing just two of their eight matches to sit comfortably in mid-table.

Parker would make another change to the side that started at the Etihad last week, with £70m summer signing Casemiro coming in for Scott McTominay.

‘Fred has been a super pro at United,’ Parker told BeMyBet. ‘He doesn’t moan and has never really been a problem.

‘At this moment in time, he deserves the opportunity to play. He is a really good player.

‘In my opinion, he should play instead of Fernandes who has been moaning and waving his arms at his team-mates all the time.

‘With Fred on the pitch, you will get someone who is quicker across the floor, someone who is very clever in how he defends. He puts people under pressure.

‘You’ve got to say to yourself, as a manager, he can’t be doing that bad if he is playing regularly for Brazil.’

Former Real Madrid midfielder Casemiro is yet to start a Premier League game this season but Parker believes his game-time will increase in the coming weeks.

He added: ‘I think Erik ten Hag has realised now that he has to start with Casemiro. He needs his experience of being involved in big games and controlling the midfield, the tempo, keeping the ball.

‘He has got better and better in recent weeks so I think it’s come to a point for him to start.

‘People keep talking about how well Scott McTominay is doing but that’s because he hasn’t been that good previously.’

On United’s clash with Everton in general, Parker – who made more than 100 appearances for the Red Devils – said: ‘If you are going to make a prediction based on form, you have got to go with Everton.

‘But I think if you look at the games Everton have played, the way they have gone about it, you still have to say Manchester United.

‘United need to be composed against Everton. It might be a game maybe not to play Fernandes because he is the one player who isn’t composed.

‘But I would say that Manchester United are the favourites. On paper they’re the better team, they just need to be brave.’