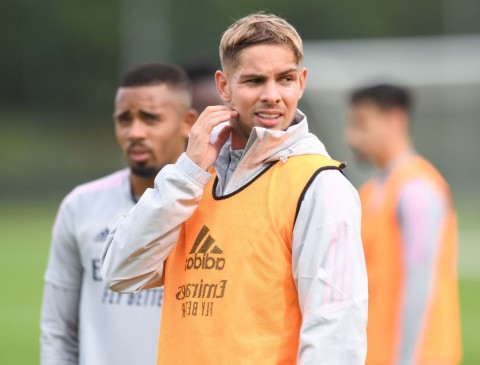 Emile Smith Rowe has opened up about missing out on Arsenal’s Premier League title challenge so far and admits it is ‘annoying’.

Smith Rowe has been limited to just 47 minutes of action in the 2022-23 campaign and has featured in just four Premier League games.

The 22-year-old England international midfielder has missed most the season through injury having undergone grain surgery.

He last appeared in the 3-1 defeat to Manchester United on September 4 – Arsenal’s only top-flight loss of the season so far – playing the last 16 minutes.

Quizzed about Arsenal’s strong start, with the Gunners top of the table and five points clear of Manchester City as the 2022-23 campaign pauses for the World Cup in Qatar, Smith Rowe told Sky Sports: ‘It’s going really well at the moment.

‘I’m really happy for the team but sometimes it’s annoying when I can’t feel like I’m involved, I can’t be on the pitch with my team-mates.

‘It’s amazing to see them doing so well and I can’t wait to get back.’

What impact will Smith Rowe have during the second-half of the season? 💬#AFC #Arsenal #SmithRowe pic.twitter.com/6SmD05wAq7

Smith Rowe was also asked when Arsenal fans could expect to see him back in action as he added: ‘Hopefully by the first game back after the World Cup.

‘I’m actually out here [in the United Arab Emirates] doing rehab. Today was my day off, I’m back training tomorrow. I’m back on the pitch and stuff so it’s going well.’

Arsenal return to top-flight action on December 26 when they host West Ham.

‘I’m sure when the boys come back we’ll get kicking straight after,’ Smith Rowe said. ‘It’s looking good but we’re all excited for the World Cup. I can’t wait to get back after.

‘I’m really confident in the [England] team, obviously we missed out at the last minute in the last big tournament.

‘I believe the boys are going to bring it home this time. The squad is really strong, it’s looking good.’