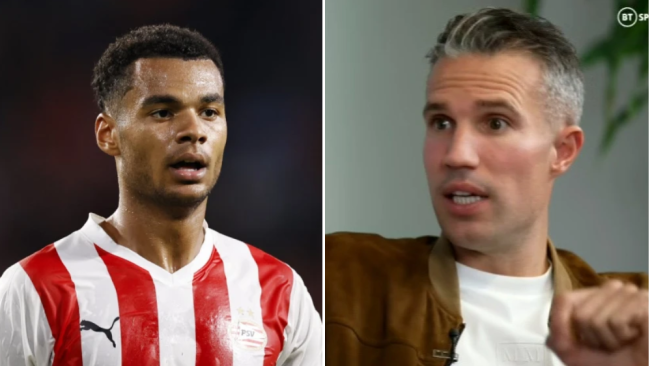 Robin van Persie believes Arsenal would be signing a ‘dangerous’ player if they landed Cody Gakpo from PSV.

The 23-year-old was heavily linked with a move to the Premier League in the summer transfer window, with Manchester United, Arsenal, Leeds United and Newcastle United all reportedly interested.

Gakpo ended up staying with PSV and has been their standout performer this season with nine goals and nine assists in the Eredivisie this season.

The winger impressed once again on Thursday evening as PSV ran out 2-0 winners over Arsenal in the Europa League.

And Van Persie believes Arsenal would be signing a versatile attacker if they pushed ahead with a move for Gakpo.

‘He is a good player,’ Van Persie told BT Sport.

‘He always finds a way in most games to have an influence, in terms of making an assist or a goal, he’s always dangerous.

‘He is not really an out-and-out striker. He can play as a No.10, he can play on the wing, or as a false striker, he can play in those four positions in front.

‘He has a good physique, he is strong, fast, he can dribble. He is an all-round player.’