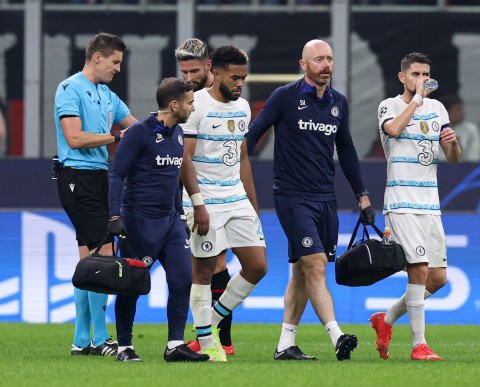 Chelsea manager Graham Potter says Reece James remains out of contention to make the World Cup with England, still many weeks away from recovering from a knee injury.

The Blues star injured his knee in a Champions League clash with AC Milan on 11 October and has been out of action since.

The 22-year-old is still in a brace and will be for a couple more weeks before going into a period of rehab which is likely to take around two months.

As such, it is unlikely that James will play much again before 2023 and it seems impossible that he will be able to be included in Gareth Southgate’s England squad next month.

‘He’s in a brace for four weeks to stabilize the knee, then it’s rehab,’ Potter said at a press conference on Friday. ‘That will take eight weeks we think. That’s the latest.’

James is joined by N’Golo Kante and Wesley Fofana on the long-term injury list, with the French pair also out of contention to make it to Qatar with their country.

‘The reality is that I’ve not got anything to say that will make it better. It’s worth me acknowledging that,’ said Potter of the serious injuries. ‘They’ve got to focus on what they control, their rehab. Things will get better and you just have to move forward.’

Conor Gallagher started the match with Brentford on Wednesday, which ended in a goalless draw, but was substituted after just 15 minutes as he was ill.

He has returned to training but Potter is not sure whether he will be available when the Blues host Manchester United on Saturday evening.

‘We are still in the process of recovery. Pretty much as we were with Brentford. Conor trained today so we will how he is over the 24 hours,’ he said.