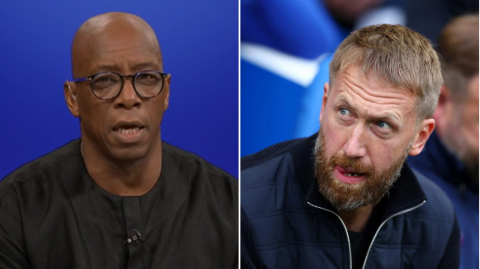 Ian Wright has urged Graham Potter to restore Chelsea’s more orthodox full-backs to the starting XI and says he was ‘very confused’ by the line-up in Saturday’s 4-1 loss to Brighton.

The west Londoners went behind after just five minutes to an early Leandro Trossard strike, while own goals from Ruben Loftus-Cheek and Trevoh Chalobah gave the hosts a three-goal lead at the break.

Kai Havertz pulled a goal back after the restart but Brighton defended stubbornly before Pascal Gross added gloss to the scoreline with a fourth goal in stoppage time.

Potter decided to continue with Christian Pulisic and Raheem Sterling at wing-back, which worked well against RB Salzburg in the Champions League, but Arsenal legend Wright felt it was a massive issue against Brighton and feels he should reconsider his team selection.

Asked what went wrong for Chelsea, Wright said on Match of the Day: ‘Well the wing-backs. We’ve seen they’ve used a variety of wing-backs this season and when you look at their bench they’ve got [Cesar] Azpilicueta and Ben Chilwell.

‘But they started with Pulisic and Sterling and I found that very confusing.

‘And when you watch what they do, and when you look at the positions they were taking up, they weren’t really helping Chalobah or Cucurella or Thiago Silva.

‘And what was happening was they [the three centre-backs] were getting pulled all over the place.

‘Everything Brighton did, look how far Silva has to come in, all the way in with Trossard, Cucurella the left-sided centre-half comes over [to the byline] and then you know there’s a load of space behind.

‘On a couple of occasions, [Ruben] Loftus-Cheek is the one who has had to try and go in there [to cover at centre-back] to rescue the situation.

‘Brighton would go down the middle, work it out wide, Chalobah comes in and gets beaten very easily, and then bam [ball in behind] every single time. And this is a problem for them.

‘And like I say, they’ve got full-backs on the bench that can play that position and give more cover.

‘You see Pulisic here, there he is, he’s with his man, his man is going on the outside of him now, but Pulisic switches off and they rightly get punished for it.

‘The centre-halves had a terrible day today because they were dragged all over the place and they had a poor game.’

Asked if the tactic of using Pulisic and Sterling as wing-backs should be done away with, Wright replied emphatically: ‘Yes. I don’t want to dress that up.’