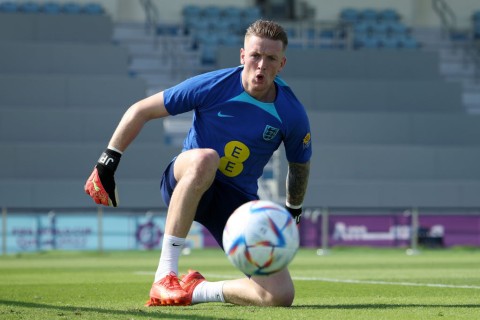 Kepa Arrizabalaga and Edouard Mendy have been competing for the gloves at Stamford Bridge, but neither have done enough to convince Potter, or the new Todd Boehly regime, that they are the right long-term choice.

The Spaniard has made six Premier League appearances so far this season, while the Senegal stopper has made nine, and Potter wants a definitive number one he can rely on.

The west London club has been linked with Brighton goalkeeper Robert Sanchez, with the possibility of Potter raiding his former club for the Spain international.

The Sun reports that Chelsea also have a watchful eye on Pickford and will be scouting him at the World Cup with England as they consider a move for the 28-year-old.

The Everton ‘keeper has won 45 caps for his country and has been first choice for Gareth Southgate for years, although there have been calls for Arsenal’s Aaron Ramsdale to start in Qatar.

Pickford has been a reliable performer for Southgate since making his international debut in November 2017, but his club form has been less reliable, while Ramsdale has impressed with the Gunners as they ride high at the top of the Premier League table.

Pickford’s contract at Goodison Park runs until 2024 and the Sun’s report states that talks over a new deal are ongoing.

The former Sunderland star is not pushing for a move, but with Everton 17th in the Premier League and just one point above the relegation zone, a switch to Stamford Bridge could prove too good to turn down.