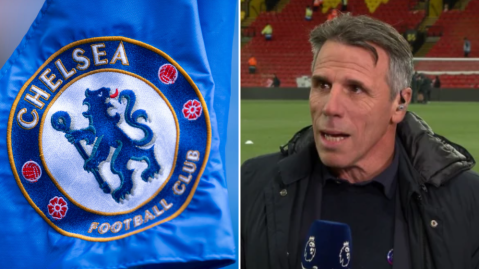 The Blues have amassed 20 points from their opening 10 league games and currently find themselves fourth, seven points behind early leaders Arsenal.

Chelsea endured an underwhelming start to the season but have improved since Graham Potter replaced Thomas Tuchel in the Stamford Bridge hot-seat.

The west London club are still unbeaten under Potter, although they were only able to secure a point against mid-table Brentford on Wednesday night.

Chelsea may feel disappointed to be held by their west London rivals but Zola believes it is a ‘good point’ for his former club, who he says ‘cannot be ruled out’ of the title race.

Zola told Amazon Prime: ‘It’s still possible. Chelsea is a very good team and has a big squad and they can be competitive in the Champions League and even in the Premier League.

‘I said before the game you cannot rule out a team like Chelsea from the title race.

‘I mean there are a lot of difficult games for the top teams, but Chelsea will be there, obviously they will have to make another step forward to raise the quality but they will be there.’

Chelsea had goalkeeper Kepa Arrizabalaga to thank as they drew with Brentford last night with the Spaniard twice keeping out headers from Ivan Toney and Bryan Mbeumo.

The visitors came close to breaking the deadlock through Kai Havertz and Cesar Azpilicueta but both were denied by Brentford’s David Raya.

Former Chelsea forward and assistant manager Zola added: ‘Chelsea is a big team and they are close to the top of the table so you may say playing Brentford they need to win, so a draw is not a good result.

‘But considering that this Brentford team really is a tough client, I consider this was a good point for Chelsea.’

Potter, meanwhile, was ‘disappointed’ his Chelsea side failed to score a winner against Brentford but admitted a draw was the ‘fair’ result.

The ex-Brighton boss said: ‘We’re always disappointed when we don’t win. Over the course of the game a point is fair, they had chances and we pushed at the end.

‘It was a tough game against a team that makes it tough. We pushed and pushed and gave it everything.

‘It’s not easy with the schedule, but we put the effort in and I’m proud of them – it’s a hard-earned point.’

Brentford manager Thomas Frank added: ‘The performance we had, especially in the first half, we were by far the better team. Overall we deserve the win, from the 84th minute we were looking a bit tired, but I think we did fantastically.

‘Kepa was fantastic. Every time Chelsea come here, their goalkeeper is man of the match.’