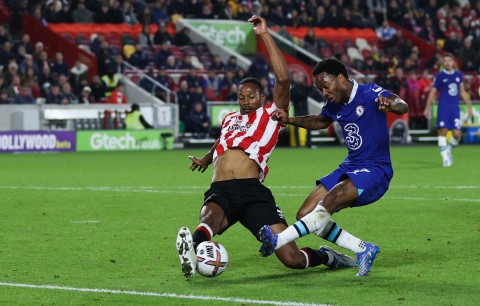 Brentford applied the brakes on Chelsea’s six-game winning run last night as the Bees held their west London neighbours to a goalless draw at the Community Stadium.

Brentford were the quicker out of the blocks, with Ivan Toney forcing Kepa Arrizabalaga into a smart save before the hosts saw a penalty appeal waved away after a clumsy challenge by Ruben Loftus-Cheek on Bryan Mbeumo.

The Blues were struggling to get a foothold in the game and it did not help when they lost Conor Gallagher to injury early on, with Mateo Kovacic stepping off the bench to take his place.

Brentford’s best chance of the half came after 34 minutes. Toney’s glancing header from close range looked goalbound until Kepa parried it to safety.

Chelsea were more threatening as the half wore on but Cesar Azpilicueta’s shot from range proved the only real test for David Raya.

Kepa was straight back into the fray after the break, dropping low to stop a Mbuemo header.

At the other end Raya stood tall to deny Kai Havertz before Mbuemo attempted a cheeky chip from distance but failed to catch out Kepa.

The Blues began to press with Trevoh Chalobah and Kovacic both having chances while Rico Henry fizzed one into the side-netting at the other end. The drama continued to the wire with Chelsea claims for a last-gasp penalty turned down.