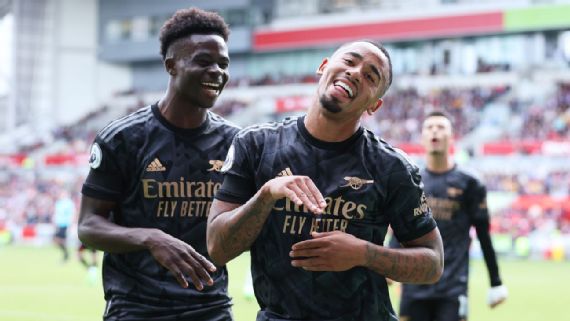 Arsenal leapfrogged Manchester City to return to the top of the Premier League table following Sunday’s 3-0 win at Brentford.

Centre-back William Saliba nodded Arsenal in front and Gabriel Jesus scored a header of his own in the first half before £34 million man Fabio Vieira struck a superb third, five minutes after the restart. Brentford had no answer as the visitors signed off before the international break with a fine win.

Arsenal boss Mikel Arteta made three changes to the side that lost 3-1 at Manchester United last time out, with Martin Odegaard and Oleksandr Zinchenko missing out through injury.

He could afford the luxury of bringing on teenager Ethan Nwaneri in injury time, with the 15-year-old becoming the Premier League’s youngest-ever player.

Brentford, with England new-boy Ivan Toney in attack, made four changes of their own but they fell behind on 16 minutes when Saliba rose highest to nod in from a corner. After a brief delay while goal-line technology checked whether the ball had gone in, Saliba then celebrated his second goal of the season.

Just 11 minutes later, Arsenal doubled their lead when Granit Xhaka’s sublime cross found Jesus, who planted his header past the despairing David Raya for his fourth league goal of the season.

Brentford, who beat Arsenal 2-0 in their first ever Premier League match last season, were a world away from such a performance here, with Aaron Ramsdale totally untroubled.

The home side were finished off on 49 minutes when Vieira received Bukayo Saka’s pass and sent a stunning drive past Raya to mark his first start in some style.

“We have a different mentality this season. we kept going and are training like we play and have class with the players that can make a difference,” Xhaka told Sky Sports.

“You have the class in the front and they make the difference. More than happy we are in a good way but a long way to go.”

“They are top of the table so you cannot argue with that, they have done brilliant. Looking at the quality, they must be title contenders.”

Arsenal face a north London derby showdown with third-place Tottenham once domestic football returns after the break, while Brentford are at Bournemouth.