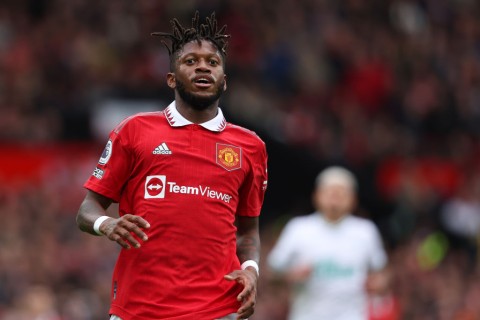 Fred has been used sparingly by Erik ten Hag this season, starting just five of United’s 11 games so far this term.

The 29-year-old was back in the side for Sunday’s clash against Newcastle United but failed to seize his opportunity with an underwhelming performance – underlined by a huge miss after being teed up by Marcus Rashford.

Former United skipper Keane has been critical of Fred in the past, highlighting his erratic passing and accusing him and midfield partner Scott McTominay of having ‘no football intelligence’ following the opening day defeat to Brighton.

Saha, who spent four years at Old Trafford, also has concerns over the former Shakhtar Donetsk star, insisting he should be doing more to help his teammates further up the pitch.

‘Every player has to do more in the Manchester United side, not just Fred,’ Saha told Boyle Sports. ‘But if Roy Keane was playing today and was a part of this team, he would be shouting, even if you’re playing well. If anyone believes they shouldn’t approve, they shouldn’t be in a Premier League team.

‘Fred has been criticised again because there are two roles, balance the team where you have to be solid, but you have to help your teammates up front.

‘There are times when Fred has the opportunity to pass the ball forwards but he takes one or two touches too much.

‘Those things can be noticed and that’s a problem. Fred is playing for Manchester United, he’s not in League Two, and everyone will have an opinion on his performances.’

United have seven different scorers this season with Scott McTominay the only player outside of United’s attacking options to chip in thus far.

With United the lowest scorers in the top nine, Saha has called for the rest of the side to start contributing.

‘It’s strange because there is a forward way of thinking in the team, how to help the wingers, how to create more chances and create a better balance in the team,’ Saha said.

‘At the same time, I’ve always felt the forwards needed more goals to come from the midfield and defence, which would really help. This is a problem, you see Fred’s chance, I’m not blaming him, but that’s part of being a good team when strikers are asked to defend while midfielders and defenders are asked to contribute to goals.

‘I’m not going to ask De Gea to score goals but there is a complementary aspect to the game where defenders need to do more in set pieces, like in the Vidic times. Same in the midfield, I’m not asking for 10-15 goals. When times are difficult, everyone should try and take opportunities.’