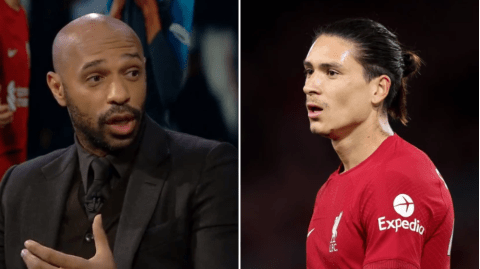 Thierry Henry believes Darwin Nunez is trying to ‘overdo it’ for Liverpool and believes the Uruguayan needs to add more composure to his game.

Liverpool’s £85 million summer signing netted his sixth goal of the season on Tuesday evening as Jurgen Klopp’s side ran out 2-0 winners over Napoli in the Champions League.

The 23-year-old has already faced criticism over his performances this season and has been guilty of missing easy chances for Liverpool.

But Henry believes Nunez is on the right track and feels the Uruguay international is trying too hard to make an impact.

‘I think he needs confidence, and the confidence that I’m talking about is when you are at a club and feel like you’re going to play week in and week out, you’re a bit more cold in front of goal,’ Henry told CBS.

‘I went through that. When you arrive as a big signing and just overdo it at times. Coming in after Sadio Mane, that’s not easy to do and you just overdo it instead of being calm, cool and finishing.

‘He’s the type of guy where when he gets one then things will come. I don’t think he’s a finisher like Robbie Fowler, not a lot of people are finishers like Robbie Fowler in all fairness, but he has goals in him.

‘He’s a bit more of a handful. Sometimes he will rush a bit like Alexis Sanchez or a young Luis Suarez when you felt like things were bounding off of him and stuff like that but when you start to master what you’re good at, then you can control it better. And I think that will happen to him. I think he can do that.’