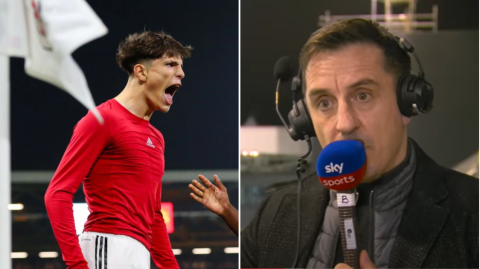 The 18-year-old came off the bench to bag all three points for the Red Devils at Craven Cottage on Sunday, showing a stunning turn of pace to latch onto Christian Eriksen’s through-ball and fire past Bernd Leno in stoppage time.

Commentator Tyler’s first words after the goal were: ‘Well he’s had his critics Gary we talked about that, but goodness me he’s rather rammed a few words down a few throats here.’

Neville also mentioned Garnacho’s disciplinary issues in the aftermath of the dramatic winner, with the Argentine teenager having struggled earlier in the season to get in the squad having been accused of a bad attitude.

Manager Erik ten Hag said he ‘was not happy’ with Garnacho earlier in the season – though largely brushed it off as the typical teething problems of a young player – while Bruno Fernandes said he ‘didn’t have the best attitude in pre-season’.

But Ferdinand is annoyed with how the youngster’s character and behaviour has already become such a big talking point and criticized Tyler and Neville’s commentary for focusing on that against Fulham rather than his brilliant run and finish.

Speaking on his Vibe with FIVE YouTube show, Ferdinand was asked about Neville’s commentary and said: ‘Bruno did an interview after the game [against Real Sociedad] when he scored, his first goal, and mentioned his attitude in the summer, that it had to improve and blah blah blah.

‘Even then I was like, “He’s just scored his first goal man, let him enjoy it”.

‘Those type of things – and I know it from being a young player who got in trouble a little bit – it’s very easy to get a reputation and it’s so difficult to lose one.

‘So to give him that [tag] and then all of sudden he does something brilliant again, and the commentator in the game goes on about his attitude, it’s the first thing that gets said.

‘And I’m sitting there going, “How do you do that?” And if [Garnacho] could understand it, or it gets relayed to him, he’ll probably be frustrated thinking, “I’ve just scored an unbelievable late goal and the first thing they say is about my attitude!” Come on man.’

Ferdinand was blown away by Garnacho’s cameo against Fulham and feels it was reminiscent of a young Cristiano Ronaldo, who netted a very similar goal 15 years ago for the Red Devils.

He continued: ‘I’m not for one minute saying he’s Ronaldo, or he’s going to be Ronaldo, but it was Ronaldo vibes.

‘I played with a young Ronaldo – forget the Ronaldo that we’ve seen this weekend – let’s go back to the Ronaldo all the people are going to remember. You look at the goal Ronaldo scored against Fulham at Craven Cottage [in 2007], that was the catalyst to go on and win the league as well, we needed it and it was a moment.’