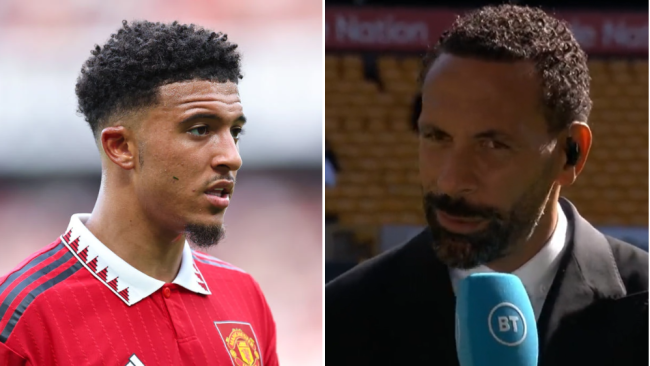 Rio Ferdinand believes Jadon Sancho would be right to feel aggrieved over missing out on the latest England squad given his recent form.

The 22-year-old won’t get the chance to play for the Three Lions before the World Cup starts in November.

Gareth Southgate has picked a 28-man squad for Nations League matches against Italy and Germany.

The likes of Harry Maguire and Luke Shaw made the squad, despite them not playing regularly for United.

Southgate has previously said he would pick players on form, and not their past performances for England.

Sancho, meanwhile, has registered three goals across all competitions for the Red Devils this season but still missed out on the squad.

United legend Ferdinand feels Sancho should be ‘disgruntled’ over the England manager’s decision to leave him out.

‘There’s a lot of defenders. I think the only real surprise in there is probably the amount of players that he’s got that aren’t playing regular football at their clubs,’ Ferdinand told BT Sport.

‘Given the kind of stance that Gareth had when he got the job in terms of players playing minutes and picking players on form.

‘Jadon Sancho will be one player who will probably look at that squad and think I’ve done what’s expected of me as a winger in terms of output, numbers-wise this season and I’m doing better in terms of numbers than other players, and I’m still not getting a look in.

‘He could probably feel disgruntled.

‘But I think that squad is a lot of what we would expect.’