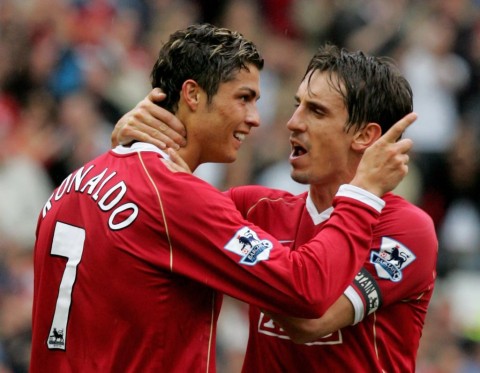 Cristiano Ronaldo has hit out at former Manchester United team-mate Gary Neville and explained why he blanked the Sky Sports pundit at the end of last month.

Prior to the Red Devils’ Premier League clash with West Ham at the end of October, the 37-year-old came out of the tunnel for his pre-match warm-up and embraced Louis Saha and Jamie Redknapp – who were both pitch-side on punditry duty.

Neville was also there but, after having slammed Ronaldo for refusing to come on as a substitute against Tottenham earlier in the month, he was given the cold shoulder by the five-time Ballon d’Or winner.

Ronaldo has now addressed the incident during his explosive interview with Piers Morgan and made it perfectly clear that the snub was prompted by Neville’s stinging criticism.

‘It’s hard to listen to that kind of criticism and negativity from people that played with you, for example Gary Neville as well,’ said Ronaldo on Piers Morgan Uncensored, having also had a pop at former team-mate Wayne Rooney.

‘People can have their own opinion but they don’t really know what’s going on, for example inside the training ground, and Carrington, and even in my life.

Asked if he is still friends with Neville and Rooney, he responded bluntly: ‘They are not my friends.’

On whether he feels betrayed by them, Ronaldo continued: ‘It’s easy to criticise, I don’t know if they have a job in television that means they must criticise to be more famous. I really don’t understand.’

Asked if they use his name for attention, Ronaldo responded: ‘I think they take advantage of that because they are not stupid.

‘And I really understand and I have to carry on with my life with criticism. But it’s hard when you see people who were in a dressing room with you criticise you in that way. It’s not good.

‘It doesn’t hurt me, I’m not going to be lose weight or sleep bad because of the criticism but it’s not good to listen to that. A little bit disappointing.’