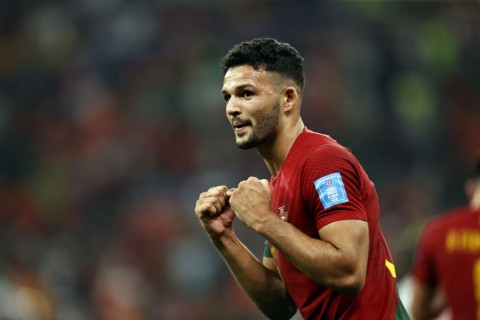 Goncalo Ramos claims Cristiano Ronaldo is still Portugal’s main man despite scoring a sensational hat-trick against Switzerland in the 2022 World Cup round of 16.

Ronaldo was shockingly dropped for Tuesday night’s important clash at the Lusail Stadium, with 21-year-old Ramos starting in his place up top.

This was the Benfica striker’s very first start for his country and he made an instant impact, becoming the first player in Qatar to score a hat-trick as Portugal thrashed Switzerland 6-1.

It is the first time since 2006 that Portugal have reached the quarter-final stage, and they will now face Morocco on Saturday after the African nation stunned Spain by beating them on penalties.

Ronaldo did eventually come off the bench, albeit with just 17 minutes to go, a decision that Portugal manager Fernando Santos insisted was purely tactical.

But the night truly belonged to Ramos, a player few had even heard of prior to kick-off becoming a young superstar within the space of 90 minutes.

Speculation will now naturally turn to whether or not Ramos will keep his place in the side for the next game or will Ronaldo return despite his lack of form this season.

That is not a question that Ramos cares too much for right now though, telling reporters post-match: ‘Not even in my best dreams did I think I would be in the starting XI for the knockout phases.

‘Regarding my expectations, we just need to take it one match at a time. Now we prepare for Morocco without thinking of any other games.

‘Cristiano Ronaldo is our leader. He’s the captain, he’s the leader and we always look forward to playing side by side with him.

Cristiano Ronaldo is going to struggle to re-gain his spot in the team after this performance… 😬#ITVFootball | #FIFAWorldCup pic.twitter.com/ChntVtONCx

‘He is my reference and an idol to many of us. Cristiano Ronaldo, [Robert] Lewandowski, [Zlatan] Ibrahimovic – those players are my role models.’

Asked about Ronaldo’s role within in the team, Santos said: ‘That is still something that has to be defined.

‘I have a very close relationship with him – I always have, I have known him since he was 19 years old.

‘This relationship only develops, Ronaldo and I never interpret the human aspect of that of manager and player (in relation to) what we have to do during the match.

‘I will always consider in my role that he is an important player to have in the team.’