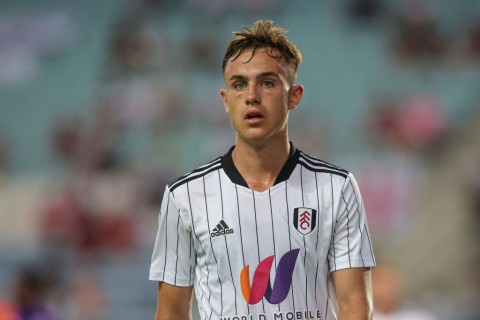 Chelsea are ready to pay £30m for Fulham’s teenage wonderkid Luke Harris, according to reports.

The 17-year-old forward was called up to Wales’ first team for the first time this month for Nations League fixtures against Belgium and Poland.

Harris, who captained Wales U17s and has also previously been called up to the U21s side, was an unused substitute as Belgium beat Wales 2-1 on Thursday.

Rob Page’s side are back in action against Poland on Sunday as Jersey-born Harris – who scored a hat-trick for Fulham U21s against Chelsea U21s earlier this year – looks to earn his first full Wales cap.

According to The Mirror, the Blues have been in ‘advanced discussions’ with Fulham over signing Harris in January with a deal worth £25m plus an additional £5m in add-ons ‘on the cards’.

Harris made his first senior appearance for Fulham against Crawley Town in the Carabao Cup last month and the club are well aware of his potential, with the teenager recently signing a new contract until 2025.

‘I’m really pleased to extend my time here at Fulham having been here from a young age,’ Harris said after signing the deal.

‘I couldn’t have done it without my parents who sacrificed a lot for me, driving me away on the weekends as a young kid, so they deserve a lot of credit.

‘I’m enjoying my football and I’m very excited for what lies ahead.’

Fulham head coach Marco Silva, who led his side to promotion last term and a strong start to the 2022-23 season – with the west London club sixth in the table after their opening seven games – also shared his views on the highly rated Harris.

‘He will get games, he will be on the bench, he will have some minutes,’ he added. ‘We have to be patient with him, and not push pressure around him.

‘Now we have to help him grow as a player. He will have his time in the first team, because he has the quality.’