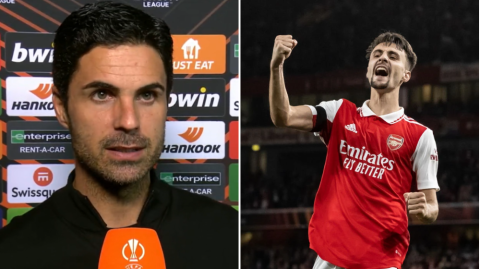 Vieira has impressed in his limited appearances following a £34m move from Porto, opening his account for Arsenal with a wondergoal in the 3-0 win over Brentford last month.

The Portuguese midfielder was on target again on Thursday night as Arsenal beat Bodo/Glimt by the same scoreline to take charge of their Europa League group.

Arteta said Vieira was a ‘real threat’ for the home side but urged his summer signing to ‘do more’ for the team from a defensive point of view.

Asked if Arsenal fans should be excited by Vieira, Arteta said: ‘Yes, you saw the quality. Every time he’s around the box he’s a real threat, really intelligent player and brave.

‘In defending he still needs to do more and understand it more because organisation is key when you play against good teams in ball possession.’

Eddie Nketiah and Rob Holding scored the other goals as Arsenal outclassed Bodo/Glimt and secured their ninth win in ten games in all competitions this season.

Asked what pleased him most about Nketiah’s performance, Arteta said: ‘When he puts the ball in the back of the net! For a manager, this is the best moment.

‘Obviously his work rate, his attitude, his application is just phenomenal. But he’s got this natural ability and he does it every time.’

On Nketiah’s role at Arsenal this season, with first-choice striker Gabriel Jesus enjoying a brilliant start to his Gunners career, Arteta added: ‘What I can say is that I’m really happy to have him in the team.

‘He has the qualities to play for this team, in any role – as a starter or a finisher, or however you want to call him. We all love his attitude and the qualities that he has, so we are really happy to have him.’

While Arsenal cruised to victory at the Emirates, Arteta was impressed by Bodo/Glimt. The Gunners will travel to Norway for the reverse fixture next week.

Arteta said: ‘It’s impressive how clear and brave they are in what they want to do. They came here and they tried to play exactly the same as they have played away or at home against any opponent.

"We weren't that consistent and dominant throughout the game"

"There are a lot of players that haven’t played a lot of minutes, you can notice that"

"In the final third we looked really dangerous"

‘That’s credit to the manager because they have put that belief in the team. So, they are a very, very good team.’

Jurgen Klopp’s side have endured an uncharacteristically poor start to the season, winning just two of their seven league fixtures to slip to ninth in the English top-flight.