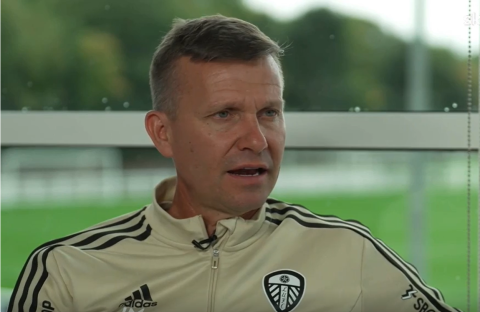 Leeds United boss Jesse Marsch has rated Arsenal’s chances of winning the title this season and hailed Mikel Arteta as the ‘most underrated manager in the Premier League’.

Arteta appeared to be fighting for his job at the start of last season but weathered the storm and has taken the Gunners to new heights this term.

Arsenal have enjoyed a brilliant start to the 2022-23 campaign, winning 10 of their first 11 games in all competitions to lead the Premier League and top their Europa League group.

As a result of Arsenal’s sensational form, Leeds boss Marsch now views Arsenal as genuine title contenders and says Arteta deserves a huge amount of credit for turning things around at the Emirates.

Asked about the job Arteta is doing at Arsenal, Marsch said at his pre-match press conference: ‘He’s the most underrated manager in the league.

‘What an incredible job. The team is complex, stable, exciting to watch… amazing job. It’s taken time obviously and he took some heat at the start.

‘But they’re seeing the fruits of their labour now. We are confident at Elland Road that we can play how we want but Arsenal are very good. We know we have to be at our best against such an opponent.’

Pressed on whether Arsenal can turn their blistering start into a title-winning campaign, Marsch added: ‘You would have to say yes.

‘They look very strong and have played against good opponents. We know they’re a good team with quality. I like it when they improve and grow together. That’s happened there too.’

On Arsenal’s specific threats, Marsch continued: ‘The combination of the way they play and the clarity of their roles along with individual quality makes them very difficult to deal with.

‘The front three are incredibly dangerous one vs one. Top of the league in take-downs and one vs one success. Look at their goals and assists.

‘It’s a monumental task for us but we need to be clear on our tactics and find the players that can execute at the highest level with discipline and confidence.’

Arteta, meanwhile, expects Arsenal’s clash at Elland road to be a ‘real battle’ despite Leeds’ inconsistent form this season.

Leeds go into this weekend’s round of fixtures sitting 14th in the Premier League, three points above the relegation zone.

Speaking after Arsenal’s 1-0 Europa League win over Bodo/Glimt on Thursday night, Arteta said: ‘We need to recover and prepare well because Leeds will be a real battle.’