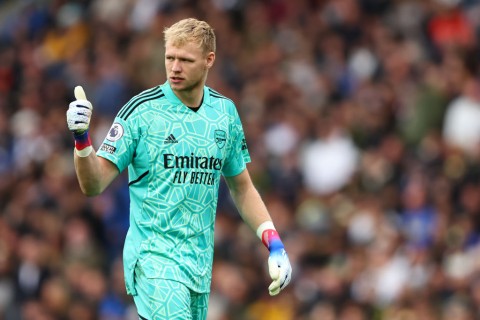 Mikel Arteta has praised the ‘excellent’ Aaron Ramsdale after admitting Arsenal were ‘lucky at times’ in their win over Leeds United.

The Gunners extended their lead at the summit of the Premier League to four points with a 1-0 win at Elland Road on Sunday – with Liverpool inflicting defeat on second place Manchester City later in the afternoon.

Bukayo Saka scored the game’s only goal after capitalizing on a mistake from Rodrigo. Leeds thought they had pulled one back through Patrick Bamford only for his effort to be ruled out after being judged to have shoved Gabriel Magalhaes.

While the visitors rode their luck at times, Ramsdale made a number of key saves, twice denying Bamford in one-on-one situations and also denying Brendan Aaronson from range.

‘We expected a lot of chaotic moments in the game, the way they played, the way the crowd pushes the team. We had to handle that and we found a way to do it,’ he told Sky Sports.

‘It was a lot of pressure. A lot of time we got the ball and gave it away We gave simple balls away in really dangerous areas, at times we were lucky. Aaron Ramsdale was excellent.’

Ramsdale was caught in a rather sensitive area after denying Bamford in the first-half, racing out of goal and making himself big to make the stop.

Asked about his best save, he said: ‘The one with my nuts maybe? Although it took a big effect on me, I’m still feeling a bit sick now!

‘I’m just thankful I was there today. I have been very critical of myself over recent games from the start of the season where goals have gone in, and there’s questions to be answered the following day. So to help the team out today was great.

‘It’s just one of those emotions where now we’ve set our bar so high, standards-wise of how we want to play, and we didn’t reach that.

‘But the overriding emotion is elation because we got three points and a 1-0win away from home.’