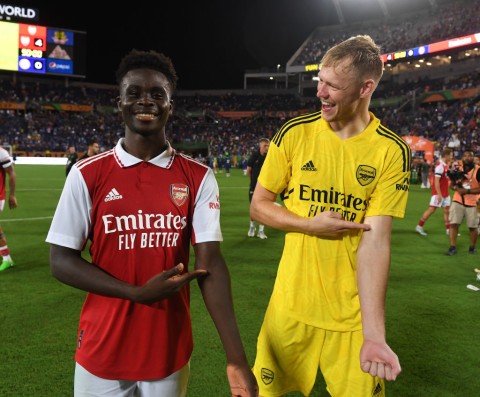 Arsenal goalkeeper Aaron Ramsdale has predicted Bukayo Saka will ‘not shy away’ from England penalties following his miss in the Euro 2020 final.

Ramsdale and Saka, who have helped Arsenal climb to the top of the Premier League table, are out in Qatar with the Three Lions as the World Cup gets started on Sunday.

Saka played a major role at England’s last major tournament, helping Gareth Southgate’s side reach the final, but they were beaten on penalties by Italy with Saka – along with Jadon Sancho and Marcus Rashford – missing their spot kicks.

The trio were unfortunately racially abused following their misses but Ramsdale is backing his club and international team-mate Saka to ‘step up’ once again if the time comes.

‘Absolutely [he would step up again],’ Ramsdale told reporters on Friday. ‘I think he’s four from four since that day.

‘I think he’s realised that it was something that maybe had to happen for him (missing the penalty in the Euro 2020 final).

‘He wouldn’t shy away from that, because of the type of person he is.

‘He knows the feeling now, hopefully the next time he steps up he’ll do what he does for Arsenal and put it in the back of the net.’

‘I honestly think it probably will happen again,’ the former Manchester United and England defender said.

‘It’s unfair. And I don’t think it’s just English players [who will be abused]. I think it’s players of colour from all over the world who will be thinking this.

‘For a player to be getting on the pitch and thinking, ‘If I make a mistake, I could be racially abused’, that’s real.

‘And in today’s day and age, should that be the case? It shouldn’t be.’