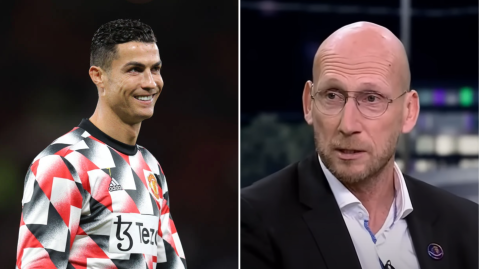 Ronaldo was left out of the squad that drew with Chelsea on Saturday evening as a punishment for storming down the tunnel before the final whistle during the midweek win over Tottenham.

The 37-year-old refused to come off the bench against Antonio Conte’s side in the latest incident to throw his future at Old Trafford into doubt, having pushed to leave the club in the summer.

There were no takers for the veteran’s services then with recent reports claiming the situation has not changed, despite United being ready to let the striker leave on a free transfer.

Former United defender Stam believes Ronaldo can still contribute to the side in the coming weeks and months with ten Hag light on options up front.

But he admits the time will come where ten Hag will only be able to trust other options in his squad, suggesting Ronaldo could be trying to force his way out once again by behaving in such a manner.

‘The biggest, most important thing is for Ronaldo to walk off and be disrespectful to the coach, the team and everyone more or less.

‘And he knows by doing so, what the consequences are, that it is going to force something to happen,’ Stam told Premier League Productions.

‘Maybe he is going to force something as well by doing so. I still find it very difficult because I like Ronaldo.

‘He is a great player, A great professional and a fantastic goal scorer and I still think you can use him at the moment.

‘But with a player like that, at the start of the season you need to have a good conversation, they probably had one but you also need to be very clear with the player who you expect from then, how you are going to play them and see if you can come to an agreement.

‘And if not, and he is not feeling well in doing so, not agreeing with the plan of the new coach, then maybe they need to find a solution where they go two separate ways and only go with the players that we have or bring someone else in.’