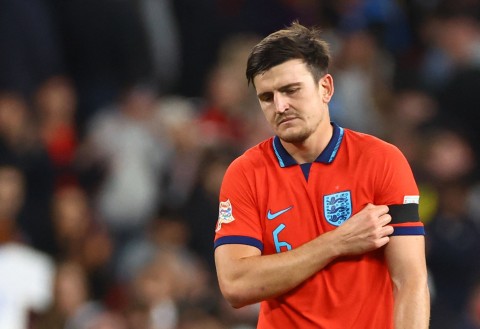 Erik ten Hag was full of praise for Harry Maguire after the Manchester United captain returned to play a starring role in the victory over West Ham.

Maguire made his first start for the Red Devils since the humiliating 4-0 defeat at Brentford back in August against the Irons on Sunday.

It was an assured performance from the centre-back who helped his side achieve a 1-0 win at Old Trafford, and one that was much needed for the player given his recent struggles and with the World Cup looming around the corner.

Ten Hag was impressed with the England international, telling BBC Sport: ‘I am really happy for the team of course but also Harry Maguire as he came off the pitch with a clean sheet.

‘He was magnificent in protecting the box. He is a great player and a really good defender and we have seen how important he is for the squad.’

After getting dropped for Raphael Varane following a poor start to the season, Maguire has scarcely featured for United thanks to a hamstring injury, and he only returned last Thursday, coming on in the second-half against Sheriff in the Europa League.

But with both Varane and Victor Lindelof now injured Ten Hag had not choice but to recall Maguire for the West Ham clash but given his performance he’ll have no problem picking him again.

United have just four games left before the World Cup break, with a crucial trip to Real Sociedad next up on Thursday evening.

‘He is a centre-half in a back four,’ Ten Hag added.

‘The first thing you have to do in your job is protect the goal, achieve a clean sheet and you’ve done it really well done together. That’s the back four, but in our philosophy is you have to defend with 11.

‘At the start, it was difficult but we are coming more and more to that point. We do it together, the spirit in the team is good you can see it in every header, they support each other and cover each other.

‘The fans like it as well and you can see the bond that is coming and developing between the teams and the fans.’