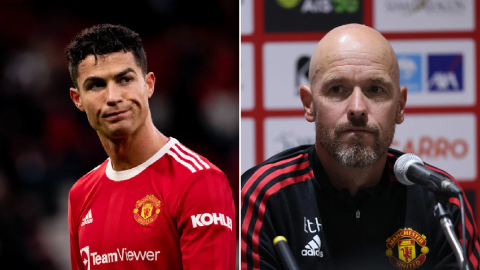 Erik ten Hag says he is still ‘counting on’ Cristiano Ronaldo for the rest of the season with the Manchester United star set to miss Saturday’s clash at Chelsea.

Ronaldo has been axed from the matchday squad for refusing to come on as a substitute in United’s 2-0 win over Tottenham last Wednesday and leaving Old Trafford before the final whistle.

Many have speculated that the 37-year-old, who desperately attempted to leave United in the summer, has played his last game for the Red Devils with his relationship with Ten Hag, his teammates and the club now beyond repair.

But Ten Hag says that is not the case at all, and hinted that Ronaldo’s punishment may only apply for the match at Stamford Bridge.

In his pre-match press conference, the United manager was asked whether he thought the Portuguese legend would remain at the club for the rest of the season and whether he wanted him to stay.

Ten Hag simply replied: ‘Both,’ both revealing that he would discuss the matter with the player in due course.

‘It [dropping Ronaldo] is for this game and then we continue. It’s a strike.

‘As we said in the statement, Cristiano remains an important part of the squad and I count on him for the rest of the season. We want to fulfil our ambitions.

Ronaldo meanwhile posted somewhat of an apology to fans for his antics, saying: ‘Unfortunately, sometimes the heat of the moment get’s the best of us.

‘Giving in to the pressure is not an option. It never was. This is Manchester United, and united we must stand. Soon we’ll be together again.’