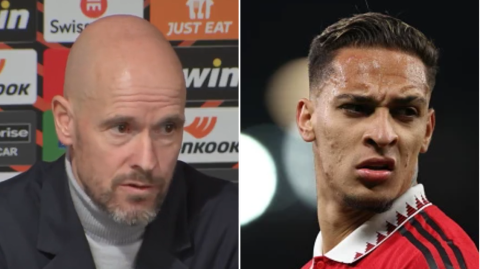 Erik ten Hag has hinted he agrees with Paul Scholes’ criticism of Antony and wants to see more ‘variation’ from the club’s most expensive summer signing.

The Brazil international has made an eye-catching start to his United career and entered the record books with his goal against Everton which saw him score for a third successive game.

Despite his impressive goalscoring exploits, it hasn’t all been plain sailing for the £86million man who endured a particularly testing night against Omonia Nicosea in the Europa League last week.

After that particular performance, the former Ajax winger was described as a one-trick pony by Paul Scholes.

He said: ‘Antony on the other side as well, he doesn’t run in behind. He seems to be a bit of a one-trick pony.

‘He’s always cutting inside and either passing back to the full-back or having a shot. You’re thinking he needs to develop a little bit. It’s still early days for him, we know that.’

The United legend appeared to row back on that criticism on social media after Antony’s well-taken equaliser against Everton after the winger put his finger to his lips during his goal celebration.

Ten Hag, however, believes there was an element of truth in Scholes’ gripe, even if he has been more than pleased with the contribution Antony has made since making his debut against Arsenal last month,

Speaking ahead of Sunday’s match against Newcastle, in response to being asked what he wanted to see more of from Antony, Ten Hag said: ‘Development.

‘I think we have seen a few now from his dribble capabilities, his speed. His finishing, also his creating, but now also he has to work on more variation.

‘I think there is really a lot of space for improvement with him [Antony], but I think he’s already at a really good level when you are the first player who scored in three in a row, three goals for Manchester United in all history. That already shows his potential.’