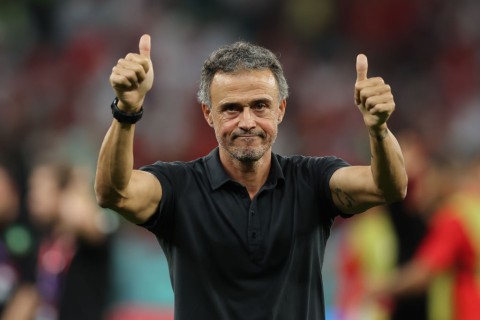 Spain manager Luis Enrique was full of praise for his players despite their shock defeat to Morocco on penalties at the last 16 of the World Cup in Qatar.

The clash on Tuesday afternoon ended goalless and remained so after extra-time, before Spain suffered a disastrous shootout, missing all three of the spot-kicks they took.

Enrique was insistent that his players did little wrong despite the upset, even saying they ‘perfectly executed’ his game plan and it was Morocco’s goalkeeper, Bono, who made the difference.

Asked if he felt his team failed to control the game, the 52-year-old said: ‘Have you been in the game? What have you been, with your back turned? If we have done anything, it has been to dominate the game.

‘We can be blamed for having generated few chances. We lacked the goal. I am more than satisfied with what he has done my team, who have perfectly executed my idea of ​​football. I am proud of them. Bono has been spectacular and I wish Morocco the best.

‘I am very happy with the profile of players that I have. They are the ones that I have chosen and I will go with them to death. I congratulate my players for how they have competed.’

He added that the only regret he had was not putting Pablo Sarabia on earlier after he came on for the spot-kicks but had two chances to score before the shootout, before missing his penalty.

‘This is sport,’ he said. ‘The players have done 100 percent all the indications I have given them. But that’s it, it’s useless to think about it. I have no reproach for the players. I only have a resentment with one player, which is Pablo Sarabia.

‘I took him out to take a penalty and on top of that he gave me two chances. That was a mistake, he showed me that he deserved more minutes.’

Enrique’s contract only ran until the end of the World Cup so his future is now in the balance, but he said this was not the time to discuss whether he will stay on or not.

‘I don’t know,’ he said. ‘This is not the time to talk about my future. It has no interest. I am very comfortable in the Federation and if it were up to me, because of the love I have received, I would continue for the rest of my life. But I have to make the best decision for myself and for the team.’