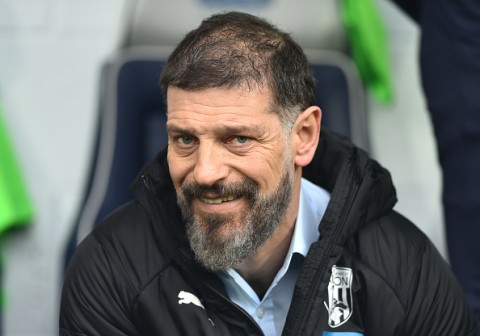 Watford have appointed former Premier League boss Slaven Bilic as their new head coach – their fifth manager in the space of just a year.

On Monday, the Hornets sacked Rob Edwards just 10 games into his tenure in charge at Vicarage Road, and within 15 minutes signed Bilic on an 18-month contract.

‘As with all decisions taken by the Board, I believe this change to be in the best interests of the club,’ Watford owner Gino Pozzo said in a statement on the club’s website.

‘We felt Rob had enough time to show us the identity of his team, however performances haven’t reflected our hopes and ambitions.

‘Now we must move forward, and, in Slaven Bilic, we have secured the services of an experienced coach who has recent experience of promotion to the Premier League.

‘The Board of Watford Football Club wishes to place on record its thanks to Rob for all of his work since his appointment and wish him and his assistant Richie Kyle – who will also leave the club – all the very best for their future careers in coaching and management.’

Edwards only joined the club in the summer following their relegation from the Premier League and was signed after impressively winning the League Two title with Forest Green Rovers.

10 games into the new season, Watford sit 10th in the Championship table with just three wins, but still only one point off the play-offs.

Since becoming Watford owner 10 years ago, Pozzo has been notorious for hiring and firing managers in quick succession, with 18 different managers over 20 different spells taking charge of the Hornets over the last decade.

In the last 12 months, alone five different men have been in the dug out namely Xisco Munoz, Claudio Ranieri, Roy Hodgson, Edwards and Bilic.

Bilic is known best in England for his spells in charge of West Ham, West Brom and the Croatia national team, notably guiding the Irons to Europe in 2016 and the Baggies to Premier League promotion in 2020.