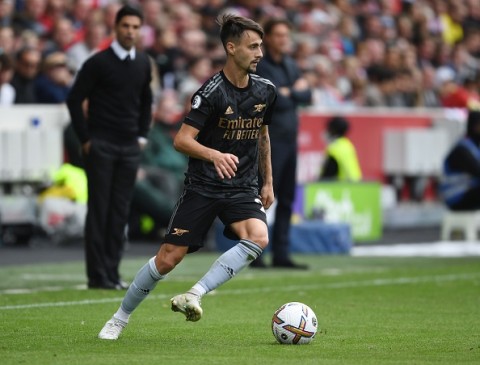 Vieira jokingly labelled his wondergoal against Brentford as ‘lucky’ as the attacking midfielder scored on his full Premier League debut on Sunday.

The 22-year-old, who joined the Gunners in a £34m deal this summer from Porto in his home country, has had to bide his time for minutes this term and was an unused substitute for Arsenal’s wins over Bournemouth, Fulham and Aston Villa.

But Vieira came off the bench during their defeat to Manchester United – playing the last 16 minutes – and was handed his first start for the Gunners’ Europa League win over FC Zurich last week.

Mikel Arteta gave him his full Premier League debut on Sunday as Arsenal beat Brentford 3-0 to move back to the top of the Premier League table, with Vieira scoring a stunning strike on 49 minutes with a long-range effort in off the post.

‘He was impressive,’ Winterburn told FreeSuperTips. ‘We saw in the Europa League that he looked a little bit off the pace and that’s just because he hasn’t had a lot of game time.

‘He had that injury and of course he’s a new player so there’s a new system and way of playing to learn.

‘I fully understand that and why he wasn’t quite up to speed in his first start the other week.

‘But I thought his performance against Brentford was impressive and I’ll admit I wasn’t expecting it from what I saw previously.

‘It looked like he might need a little bit of time to settle in, but it was a good performance.

‘He looks confident on the ball; he can pick out a pass and of course it was a wonderful finish at Brentford.

‘We’re looking for that on a regular basis now and that will be what he’ll be hoping for.’

Premier League leaders Arsenal return to action on October 1 when they host Tottenham for the first North London Derby of the season.