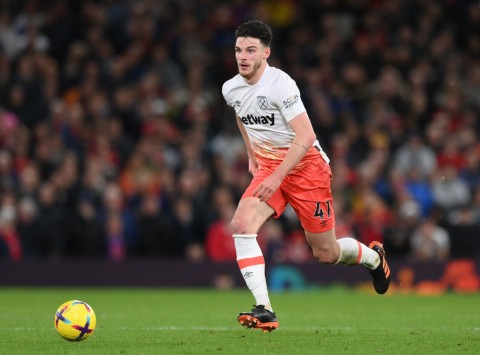 It is no secret that the Reds are in need of a new midfielder, with Jordan Henderson and James Milner not getting any younger and the likes of Thiago Alcantara and Naby Keita still struggling with injuries.

Klopp has previously stated that the club are happy to wait for the right player to come along next summer rather than panic buy one, but with his side enduring an awful start to the season those plans may have changed.

The Reds have been tipped to break the bank on a big talent, with Borussia Dortmund and England sensation Jude Bellingham the name on most pundits lips.

However, Fowler believes that while Bellingham would be an excellent addition, Klopp and co. would do well to move for West Ham captain Rice.

‘The Bellingham link is brilliant because he’s a very good player,’ the legendary striker told FairBettingSites.

‘Another player who I really like is Declan Rice, he fits into a Liverpool mould. Whether Liverpool are looking at players to come in, they have to have a certain amount of pedigree, those players need to have lots of energy.

‘And I do think Rice fits that bill, he’s a player who sits in the middle of the park but he can get around the pitch with his endeavour as well.’

Rice’s abilities are well-known, with the 23-year-old widely considered to be one of the best defensive midfielders in the world and an integral part of the current Three Lions set-up.

For several seasons now, he has been linked with a move away from east London, with the Irons fending off interest from boyhood club Chelsea and Manchester United.

He would not come cheap though, with West Ham boss David Moyes valuing Rice at around ‘£100million’, but nevertheless Fowler says Liverpool must act quickly to secure his services.

‘Not to be disrespectful to West Ham, but Rice will be a name on the top of many top teams’ lists whether that’s in the summer or January,’ he added.

‘Rice has been class for a few years now and you can see why clubs want him, but for me, he fits the mould of a Liverpool player.’