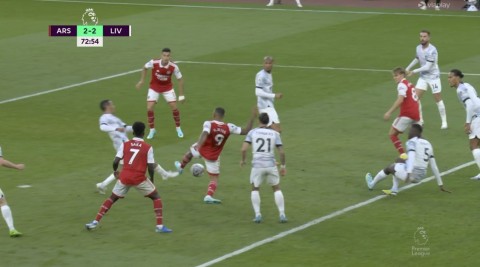 Former Premier League referee Dermott Gallagher has revealed that Michael Oliver was not asked by VAR to review his penalty decision in Arsenal’s 3-2 win over Liverpool because his version of the foul did not differ from the television replays.

Mikel Arteta’s side edged out Jurgen Klopp’s men in a thrilling match at the Emirates Stadium on Sunday as Bukayo Saka’s second-half penalty sealed the win for the hosts.

But Liverpool, who also had their own penalty claim for Gabriel’s handball turned down in in the first half, were aggrieved by the decision to award Arsenal a spot-kick for Thiago’s foul on Gabriel Jesus.

The Liverpool midfielder made minimal contact with Jesus’ ankle but it was enough to send the Arsenal forward to the floor and for Olivier to award a penalty.

VAR did not ask Olivier to review his decision on the pitch-side monitor, despite many believing that the call was soft.

Asked if he was surprised that VAR did not ask Oliver to check the penalty, Gallagher told Premier League Productions: ‘No, I’m not.

‘Because I think what would’ve happened when Michael made his decision, the VAR and referee would speak quickly and Michael would’ve said he’s convinced he hasn’t got the ball and caught him across the bottom of the ankle, and in his view it’s a penalty.

‘VAR looks, you can see he doesn’t get the ball, he does catch him across the ankle, so there’s nothing to send him across to say it’s a clear and obvious error for me. The pictures do reinforce what he would say.’

Asked if he felt lighter touches are now being deemed as fouls, Gallagher replied: ‘I don’t think just because you’ve touched someone it’s going to be a foul.

‘On this occasion, he’s [Oliver] seen that, he’s felt Jesus has been caught by Thiago, he gave a penalty, I think VAR looks at it and a combination of the two, he’s not going to change his mind.

‘It’s difficult, I think because it was such a good game, such a physical game, a decision like that stands out.