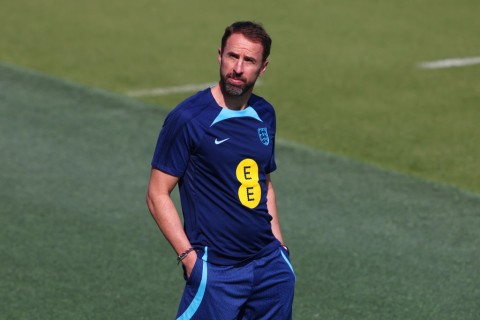 Gareth Southgate is demanding clarity from Fifa amid fears England’s World Cup bid could be hurt by inconsistent refereeing and use of VAR.

England began their campaign with a thumping 6-2 win over Iran notable for two controversial penalty calls.

Referee Raphael Claus failed to give an early spot-kick when Harry Maguire was dragged down and was backed up by the video assistant referee.

But VAR sent the Brazilian to the monitor near the end of the game after a slight shirt-pull by John Stones and a penalty was given to Iran, which was converted.

Southgate is concerned a goal by Maguire against Albania last year was used as an example of what should be considered a foul by World Cup referees’ chief Pierluigi Collina. Kalvin Phillips had blocked an opposing player, allowing Maguire space to score.

‘What worries me is we were used in an example in the referee’s video,’ Southgate said. ‘And what we were shown, the incident in the first half, we were told that would be a definite penalty, the second half… maybe there’s a shirt pull, we’ve got to be better on that.’

Pressed on whether he would get clarification from Fifa before England’s fixture with the USA on Friday, he added: ‘That happened in Russia actually and we’ve got to have that dialogue and just make sure.

‘We want clarity. Goals are going in and we don’t know whether they stand or not. The bit that worries me is we were the example we were shown.’