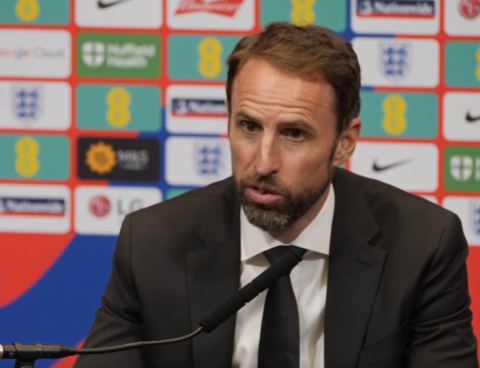 Gareth Southgate has urged his England players to ignore the ‘external noise’ after they were booed off following a drab draw with USA at the World Cup.

England were handed a World Cup reality check by USA on Friday as they failed to build on Monday’s emphatic 6-2 victory over Iran.

The Three Lions dazzled in their World Cup opener but failed to replicate that performance against an American side who drew 1-1 with Wales in their first match of the tournament.

Southgate’s side were second best for long periods as they missed the chance to seal qualification to the World Cup knockout stage with a game to spare.

USA will leave the Al Bayt Stadium the more disappointed of the two sides as they failed to convert a number of chances, with Chelsea’s Christian Pulisic hitting the crossbar and Weston McKennie firing over from close-range.

England remain firm favourites to top Group B and move into the knockout stages but many fans were left concerned by their performance against USA and boos rang out at the full-time whistle.

‘The objective is to qualify and we have three games to do it. We have to stay calm in this moment. There will be external noise and we will have another layer of that I’m sure.’

The Three Lions boss added: ‘To come off the high of the other day and find the same quality was always going to be a challenge.

‘I thought we controlled the game really well. Our two centre backs were absolutely outstanding with the ball. Yes, we lacked a bit of zip and quality in the final third.

‘But we had to show another sign of ourselves without the ball. To be a successful team in the tournament you have to show a lot of faces.

‘I am sure there will be a lot of noise but not a lot of teams get nine points in the group.

‘The players were very down and disappointed but I told them that isn’t how it is going to be over the next few days.’