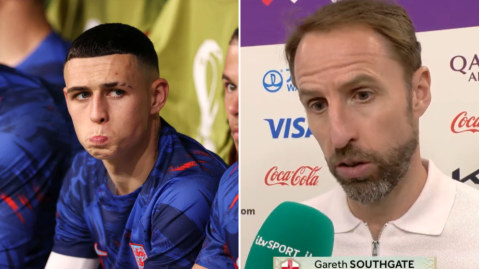 With the Three Lions struggling to break a resilient and dangerous USA down, it appeared only a matter of time before Foden came off the bench to try and make an impact.

But Foden remained an unused substitute, with Southgate instead bringing on Jordan Henderson, Marcus Rashford and Jack Grealish in the second half.

While England improved after the changes, they could not find a winner and were perhaps fortunate to avoid defeat, with USA coming close in the first half, most notably through Chelsea star Christian Pulisic who struck the bar.

Asked why he overlooked Foden during the USA stalemate, Southgate said: ‘We wanted to keep the same team from the start.

‘With the wide players, we went with Jack [Grealish] and Marcus [Rashford] instead of Phil [Foden] on the changes as we felt Jack would keep the ball well for us and get us up the pitch and Marcus’ speed would be a threat coming into the last part of the game.’

On the game as a whole, Southgate added: ‘Exactly the sort of game I thought it would be – it was really tough against a good opponent who were very athletic.

‘I knew it would be difficult for us after such a high to replicate that sort of performance [against Iran]. I’m really pleased with how the players have applied themselves.

‘Some of our quality in the final third could’ve been a bit better, but we’ve shown great resilience to defend against an opponent that kept asking questions.

‘We’ve controlled the game well from the back and just not been able to open them up with that really clear-cut chance.’

England need to avoid a three-goal defeat to Wales in their final group game to secure their place in the World Cup knockout stages.

Manchester United defender Harry Maguire admitted England ‘were not at their best’ against USA but was keen to take the positives from the draw.

‘It wasn’t our best – it’s a point and puts us in a strong position in the group,’ he said. ‘They’re a good team that play at high tempo.

"Not scoring one of those big chances in the first half I think killed us." 🗣

"I don't think it was a bad performance at all." 💬

Declan Rice gave his thoughts to @GabrielClarke05 after England's draw with the USA pic.twitter.com/qJQA3tAGBC

‘We had to work hard and we could’ve nicked it at the end. We could’ve been a bit more clinical. We’ll take the positives but there’s things we need to work on.

‘These games are tough. They’re all top teams playing in this World Cup, USA are a good team.

‘We weren’t ruthless enough in the final third, didn’t execute the final pass well enough. We have good forwards so I’m sure we’ll be back next game.’