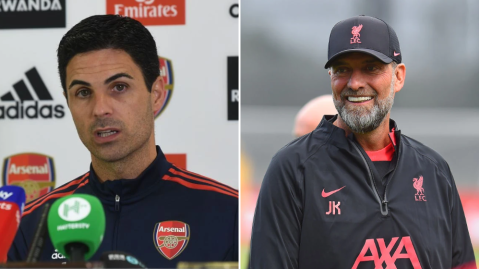 Mikel Arteta has hailed ‘special talent’ Trent Alexander-Arnold as Arsenal prepare for the visit of Liverpool, while Jurgen Klopp has addressed Mohamed Salah’s subdued start to the season.

Title-challenging Arsenal will look to reclaim their place at the top of the Premier League on Sunday when mid-table Liverpool travel to the Emirates Stadium.

The Gunners have enjoyed a brilliant start to the season – winning seven of their first eight league games – and will move back above defending champions Manchester City if they manage to pile more misery on Liverpool.

Klopp’s side have been one of the most formidable teams in Europe over the past few seasons but a poor start to this campaign – they have won just two of their seven league matches – has seen them slip to 10th, closer to the relegation zone than the top-four.

A home win would see Arsenal move 14 points clear of last-season’s runners-up, but an away victory would see Liverpool close the gap on their top-four rivals and send a message to the division.

The spotlight will be on England right-back Alexander-Arnold at the Emirates following a turbulent start to the season. While the 24-year-old has scored domestically and in Europe, pundits have largely criticized his defending.

Asked about the Liverpool star ahead of Sunday’s showdown, Arsenal boss Arteta said: ‘Well, he is a very special talent.

‘What he adds offensively to the team every year is difficult to find in that position.’

‘Trent is struggling. The problem with Liverpool is that almost every goal is coming from Alexander-Arnold’s side of the pitch,’ Gallas said earlier this week.

‘He is playing far too high. From an attacking perspective, we all know that he has great quality and he can deliver plenty of crosses and create chances for his team-mates to score from, but when he has to defend he is not strong enough.

‘I’m not surprised by his performances. I think over the last few years, because of what he can do going forward, creating so many assists, people failed to see the weaknesses in his game as a defender.

‘His first job is to defend very well. How many goals have Liverpool conceded from his mistakes? Nobody talks about this when you’re winning games.

‘Liverpool were on fire, winning games, winning trophies and the number of assists he registered was magnificent, but these errors were always in his game.

‘For Arsenal, this is the right time to play Liverpool.’

While most of Liverpool’s problems this season have been in defence, they are also not firing on all cylinders offensively and appear to be missing Sadio Mane, who left Anfield to join Bayern Munich last summer.

Salah, one of the most prolific goalscorers in Europe over the past five years and last season’s joint-top scorer in the Premier League, has only scored twice in seven league games this term.

Klopp, though, believes the Egyptian superstar could be returning to his best form, like his team as a whole.

‘With Mo, I hope it’s like us, we are close to exploding,’ Klopp said. ‘Even when his goalscoring numbers aren’t crazy, his goal involvements are good.

‘His passing is good. Nobody can cope with the [Erling] Haaland situation, it’s crazy what he’s doing. Exceptional player in an exceptional team and we shouldn’t compare anyone with that.

‘Mo wants to score goals desperately. Call him in 20 years, it will be the same.’

Klopp fully expects a tough afternoon for his Liverpool side as they prepare to meet Arteta’s in-form Arsenal.

He added: ‘Arsenal was always there, City was always there with Manuel Pellegrini when I first arrived, I think. But their football is now better, quicker, more intense.

‘If you are a top manager, you arrive here pretty much in a year. Top-class managers all round makes it more difficult.

‘I’m pretty sure Arsenal fans are pretty happy with situation they now find themselves.

‘Maybe similarities to when I took over at Liverpool. A big club and we’ve had big games against them. Now they are ready for the next step.’