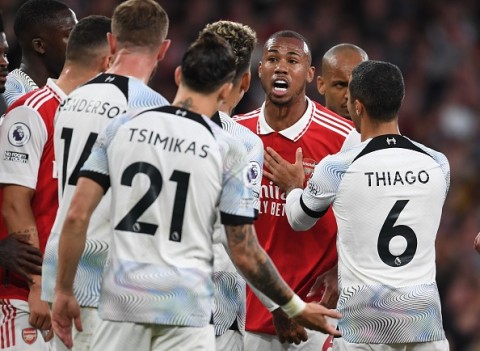 The flashpoint of Sunday’s thrilling Premier League encounter came with 15 minutes remaining when Arsenal were awarded a controversial penalty after Thiago Alcantara had been adjudged to have fouled Gabriel Jesus.

As Liverpool’s players protested referee Michael Oliver’s contentious decision, Gabriel became incensed and confronted Henderson before he was held back by his teammates.

The Football Association is currently investigating the matter and has asked both players for their version of events.

Reports earlier this week claimed Gabriel was convinced he heard ‘something bad’ while the governing body could yet call upon a professional lip reader to determine the validity of the Brazil international’s claims.

Jurgen Klopp was asked about Henderson’s state of mind prior to last night’s 7-1 win over Rangers and confirmed the England midfielder had not been adversely affected by the incident and he subsequently started at Ibrox before being substituted in the 67th minute.

On Wednesday Arteta refused to be drawn on the FA’s investigation. ‘It’s something I don’t want to touch. It’s in the FA’s hands and I’m not going to get involved in that,’ said Arteta, who was speaking before Arsenal’s Europa League game against Bodo/Glimt in Norway on Thursday.

Asked, however, if he supported his players’ version of events, Arteta said: ‘One hundred per cent.’

Arteta added that he was not clear how long the process of reviewing the incident would take, saying: ‘I don’t know. It’s something that I don’t decide.

‘I think timings are really difficult to predict. The FA is in charge of the situation and we’ll have to wait and see.’

Arsenal, meanwhile, will hope to continue their impressive form this evening and take control of a Europa League group that also includes PSV but the challenge of tonight’s opposition isn’t being underestimated by Arteta.

He said: ‘I think I mentioned it before the home game, that what this team and this coaching staff has done in the last few years is remarkable.

‘Especially in Europe, because it’s got more headlines to the rest of Europe, but without a question of doubt, the scores that they’ve had here explain themselves.

‘Looking at the group, tomorrow’s result is going to be really important because we can eliminate playing an extra two games and the opponents that you will be facing after that, so we know that we want to be top of the group.’