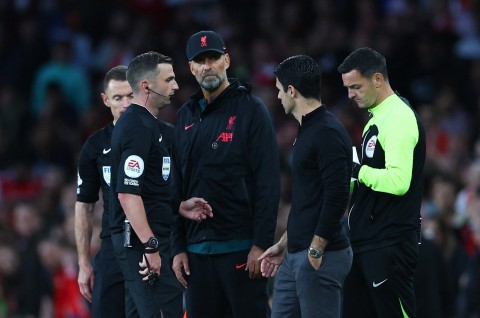 Jurgen Klopp has accused Mikel Arteta of pressuring referee Michael Oliver to book Liverpool’s players during their 3-2 defeat to Arsenal on Sunday.

Gabriel Martinelli gave Arsenal the lead after 58 seconds before Darwin Nunez equalised for Liverpool. Bukayo Saka then struck moments before the break to put Arsenal back in front, however, Klopp’s side were level once again through Roberto Firmino.

Liverpool were also aggrieved in the first half when their penalty shout for Gabriel’s clear handball, which blocked Diogo Jota’s cross, was waved away by Oliver.

But speaking after the game, Klopp revealed he was unhappy with Arteta pressuring the referee into giving Joe Gomez a yellow card in the second half for time wasting.

‘The situation around the penalty happens, I think everyone agrees we should’ve kicked that ball a bit earlier over the roof, we didn’t do that, the ball comes back, again, it’s very soft, if, if, if… but we can’t take that back,’ Klopp told Viaplay.

‘First half we don’t get that back, that’s the handball from Gabriel, the ref tells us we can talk to him after the game, we can ask him what does he think and he will tell me this was no handball but this is a foul, that’s obviously not necessary this conversation.

‘There were a couple of situations, let me say it like this, again, the result is the result, done.

‘But Joe Gomez’s yellow card, a defender, a yellow card for this throw-in situation.

‘In the first half I don’t know how often and how long Arsenal were looking for an option in a throw-in yet nothing happened, and I’m fine with that.

‘But Joey is there and Mikel is having a go at the ref and then he [Oliver] says, ‘okay, yellow card’ from a distance and you think, ‘yellow card, for that?’.

‘So again, nothing to do with the result, just these situations, they don’t help but you’re right, they’re useless conversations [with the referee].’