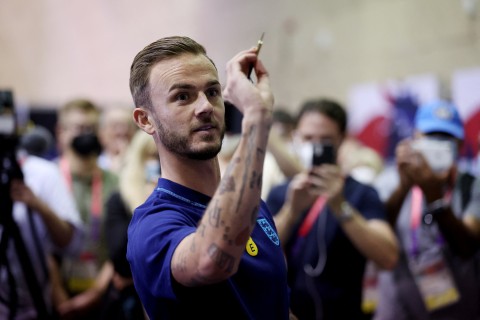 James Maddison claims he never gave up hope of an England recall, revealing he used the disappointment at being overlooked for successive squads to fuel his bid to make the World Cup in Qatar.

The attacking midfielder has been in brilliant form for Leicester this season but, having not been picked by Gareth Southgate since winning a sole cap in 2019, the 25-year-old was not alone in thinking he might not make the plane.

However, Southgate found room for Maddison in his 26-man squad and, after training with his team-mates for the first time in Qatar yesterday, the former Coventry and Norwich star explained what it all meant to him, and how he had never given up on his international dream.

‘We have seen with Gareth especially in the past that he has brought players back in if they’re in good form, and thankfully that was me for this tournament,’ Maddison said.

‘I don’t think at any point I thought it was a closed door and the opportunity had gone.

‘It was just about staying hungry and almost using the rejection of not getting called up in previous camps as motivation to try and get back in and force my way back in.’

Asked if he had expected to get the call last week, he added: ‘I was kind of braced for both a little bit – like hoping for the best but preparing for the worst.

‘I hadn’t been in a squad for three years and I’m not naive. I understand how it works and stuff.

‘But I also had that hope, that I was playing, I was in good form, I was in goalscoring form. I’ve been a threat for a little while now on the pitch and was hoping for the good call instead of the bad call. Obviously some players missed out and stuff, but thankfully I was on the receiving end of a good phone call from Gareth and one that I’ll never forget.’

Speaking at England’s Al Wakrah base. Maddison suggested the news is still sinking in, admitting: ‘Every moment at the minute is almost like a pinch me moment.’

Revealing his dad was moved to tears when told about his call-up last week, Maddison added: ‘He is not a crier! I don’t think I have seen him cry for years.

‘They were happy tears, of course. Your family, your parents, they are on this journey with you, you know? When, in previous years, I have been left out and had that disappointment, it is spread across the family.

‘Now it’s the opposite end of the scale with the happiness.

‘It was a special day for all of us, one I will never forget.’

Kyle Walker gave England a World Cup boost by joining Gareth Southgate’s squad yesterday as they trained for the first time since arriving in Qatar.

The Manchester City defender had groin surgery just over a month ago but Southgate has suggested he could be fit for the latter end of the group stage.

Walker said: ‘That is down to the manager. I think probably the [time until the] first game is too short but from then I will be good and ready to go.

‘To represent your country at any tournament is always a great achievement, but I think this one is special due to the circumstances. Just through the injury. It was an operation I had and it was touch and go, but that’s full credit to the physios here and also at Man City for getting me back fit and healthy.

‘I was never worried. I always have to believe in myself.