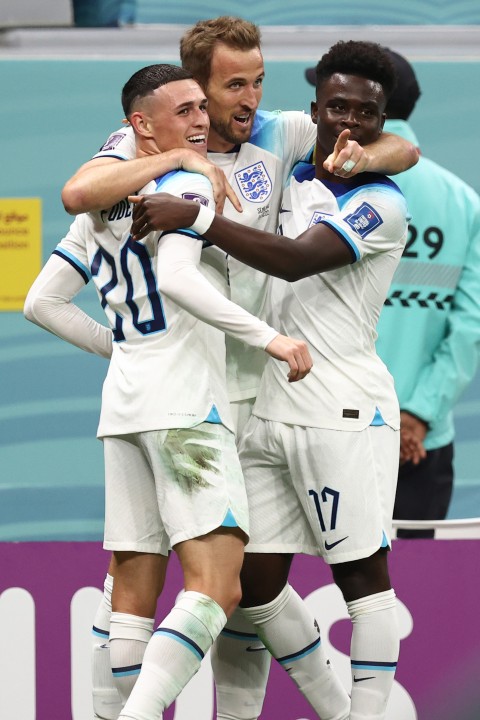 England are gearing up for a blockbuster World Cup quarter-final against holders France on Saturday night after a convincing 3-0 victory over Senegal in the last 16.

Jordan Henderson, Harry Kane and Bukayo Saka were on target as Gareth Southgate’s men brushed aside a team that won the Africa Cup of Nations earlier this year.

Captain Kane, fresh from firing in his first goal in Qatar for the tournament’s top scorers, insisted England would be ready for the challenge of a French side who eased past Poland 3-1 in their own last-16 match yesterday.

‘We enjoy this one but then of course our focus then turns straight to that,’ he said.

‘It’s going to be a really tough game, they’re the reigning champions but it will be a good battle. We’ll recover nicely now and get ready for the game.’

Kane hailed the maturity England showed after initially struggling to impose themselves on a game where Senegal provided most of the threat until Henderson’s breakthrough goal seven minutes before the interval.

‘Credit to the boys, our mentality was top from the beginning and we took our chances when they came,’ he told ITV. ‘We’ve got a great blend of youth and experience and another knockout win. Over the years it’s not been easy for England, so to win 3-0 was just a really great night.’

Phil Foden, who provided assists for two of the goals, hailed the contribution of 19-year-old Jude Bellingham who was a driving force as England scored twice late in the first half.

‘I don’t want to big him up too much because he’s still young but he’s one of the most gifted players I’ve ever seen,’ he said. ‘I don’t see any weaknesses in his game and he’s going to be the best midfielder in the world, for sure.’