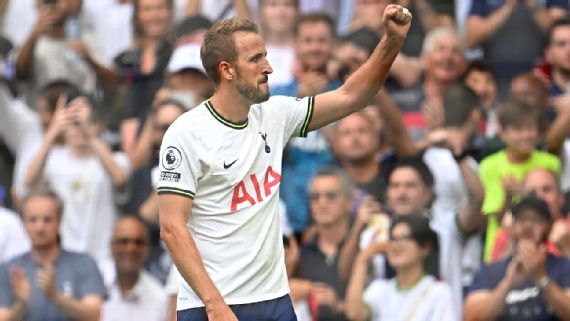 Tottenham manager Antonio Conte has urged England fans not to worry about Harry Kane’s fitness ahead of the World Cup.

Kane has started all 21 of Tottenham’s games this season, playing the full 90 minutes on all but two of those.

The striker was replaced after 59 minutes in Wednesday’s Carabao Cup third round defeat to Nottingham Forest with Conte revealing Kane was ‘really, really tired’ following the frantic start to the season.

The 29-year-old is expected to start against Leeds United on Sunday with England’s opening World Cup fixture against Iran now looming large on 21 November.

And despite sparking concern with his midweek comments, Conte has reassured there should be no concerns over Kane heading into the tournament.

‘The fans must not be worried for him,” Conte told a press conference on Friday.

‘After this [Leeds] game there is one week, eight days to prepare for the World Cup. It is very difficult. He is working very well. Also we are talking about a player with great experience to manage his body.

‘I think Harry is going to play a fantastic World Cup because in this season he was never injured, he has been able to train well, he is good physically and for sure to play many games in such a short period is difficult – but not only for Harry. Eric Dier is another player going with the [England] national team.

‘To play 13 games in 43 days mentally you could be a bit tired. But top players have to be good to manage these situations. You make the difference by managing these situations in the right way.

‘When you are a top player it is very difficult for the manager to put them on the bench. You need your top players to play.

‘There is a big risk for all the national teams. All the players have played a lot. Then the games with the clubs finish and the World Cup starts.

‘The coach of the national teams have to be very good to manage the situation. Until now, we have managed the situation, and believe me, it was really, really difficult.’

Tottenham are set to head into the World Cup break in the top four regardless of Sunday’s result, thanks to their vastly superior goal difference ahead of Manchester United, who sit three points behind in fifth.