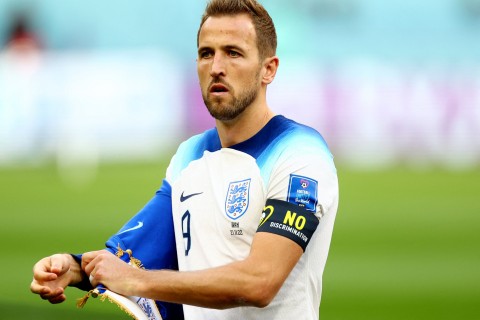 Harry Kane is happy to be making goals and letting his England team-mates score them after a crushing opening win over Iran sent their confidence sky-high.

The skipper created goals for Raheem Sterling and Marcus Rashford but did not score himself in Monday’s 6-2 victory before being replaced as a precaution in the 76th minute following a heavy challenge.

Tottenham striker Kane has been heavily relied upon by his side for goals in previous tournaments, scoring six times at the 2018 World Cup – winning him the Golden Boot in the process – and four at last year’s European Championship.

But with all six goals coming from other sources at the Khalifa International Stadium, he is delighted his team-mates have started the World Cup in free-scoring form.

‘To go far in any major tournament you need goals, from not just from your main striker, but from all over the place,’ said Kane.

‘We started the game really well, the boys who have come on have done fantastic.

‘It will give everyone confidence. Everyone, whenever you score or get an assist, it lifts their spirits and we’re going to need everyone to do well in this tournament.’

Kane acknowledged his annoyance that Porto forward Mehdi Taremi was able to score two consolation goals and there are clearly things to tighten up at the back ahead of Friday’s second match in Group B against the USA.

‘To score six goals in a World Cup match is pretty good, (I’m) really happy, disappointed to concede a couple of goals but overall a great start to the tournament,’ he added. James Maddison was yesterday once again absent from training due to his niggling knee issue.

The Leicester midfielder was unavailable for the victory over Iran having not trained since the first session the team held on arrival in Qatar last week.

He was forced off in the Foxes’ win at West Ham in the final round of Premier League fixtures before the break for the World Cup.

While Maddison remains a doubt for England’s second Group B game, everyone else is in contention.

Captain Kane took a blow to his ankle against Iran and Harry Maguire came off feeling ill but both are expected to be fine.