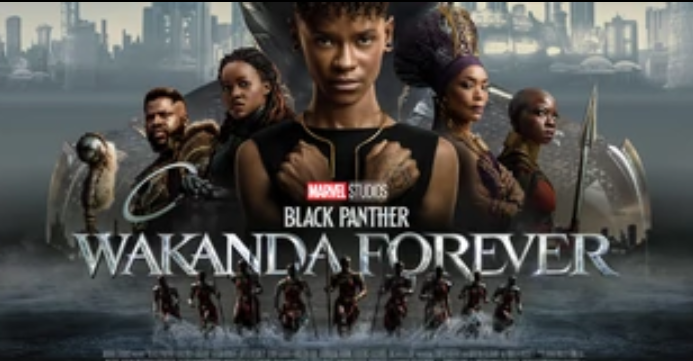 Ryan Coogler returned to direct the Marvel flick with the majority of the cast including Lupita Nyong’o , Leitita Wright, Angela Bassett and Danai Gurira reprising their roles, following the heartbreaking death of their co-star Chadwick Boseman.

The late star, who played King T’Challa in the first Marvel instalment, died in August 2020 aged 43 following a private battle with colon cancer.

According to reports, the superhero earned $180million (£152million) in ticket sales in the United States alone.

Variety also reported that the movie has raked in $330million (£278million) worldwide.

Marvel confirmed that they would not be recasting Boseman’s iconic role, and would instead be focusing on the wider characters and history of Wakanda in the film.

Speaking earlier this month, Letitia (Shuri) said the upcoming sequel honours Boseman and is a ‘love letter’ to the late actor.

‘I feel, for me, it’s a beautiful contribution to Chadwick’s legacy,’ she said during an episode of The Tonight Show Starring Jimmy Fallon.

‘I feel like it’s a love letter to him. I know every day that I went on set, I focused my energy on each scene to dedicate it to him. I wanted to dedicate excellence to this film so that he could be proud.’

Speaking on Marvel’s official Black Panther podcast, Director Ryan revealed in a final call with Boseman, the actor had turned down reading the script for the second Black Panther film – and he soon learned the sad reason why.

‘I had just finished it [Black Panther 2 script]. My last conversation with him was calling him and asking if he wanted to read it before I got notes from the studio.

‘That was the last time we spoke, and he passed maybe a couple of weeks after I finished. […] He was tired, bro. I could tell he was tired.’