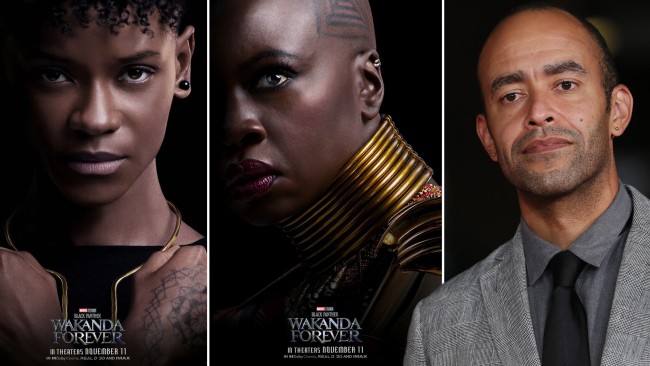 The release of Black Panther: Wakanda Forever is just around the corner, though it looks like a third instalment in the franchise could be coming already.

Pop sensation Rihanna joined the cast of the upcoming Marvel film this week for the star-studded premiere after it was confirmed she would be singing on the film’s soundtrack.

Letitia Wright, Daniel Kaluuya, and Angela Bassett were also dressed to impress at the Hollywood event.

And as we gear up for the blockbuster release on November 11, Marvel Studio producer Nate Moore has confirmed talks are already underway for a third Black Panther film.

Moore said ideas for Black Panther 3 have been discussed, but teams behind the scenes are waiting to see how audiences react to the second instalment before making any final decisions.

‘We really want to see how audiences receive the film, and I think Ryan’s [Coogler, director] really interested to see how the film plays before we decide,’ he told Collider.

‘There are certainly ideas we’ve floated around of what a third film could be if we get to make it. But until the movie comes out, we’re a bit superstitious in that way.

‘We don’t want to count our chickens, because you never know what’s going to happen.’

Attending the premiere for the film, Coogler wore a gold chain with Chadwick Boseman’s picture on to keep his memory alive following his death in 2020.

Boseman played the franchise’s titular character in the first Black Panther film ahead of his death after being diagnosed with stage four colon cancer, for which he had privately been undergoing cancer treatment since 2016.

Wright, who plays Shuri in the film, also wore an outfit similar to an iconic one worn by Boseman, which was instantly recognisable as she stepped out in a black suit with bedazzled shoulders.

It was decided that the much-loved star, who was just 43-years-old when he died, would not be recast in Black Panther 2, with producers instead making the sequel a tribute to Boseman and his character’s legacy within the Marvel Cinematic Universe.

Black Panther 2 is released in UK cinemas on November 11.