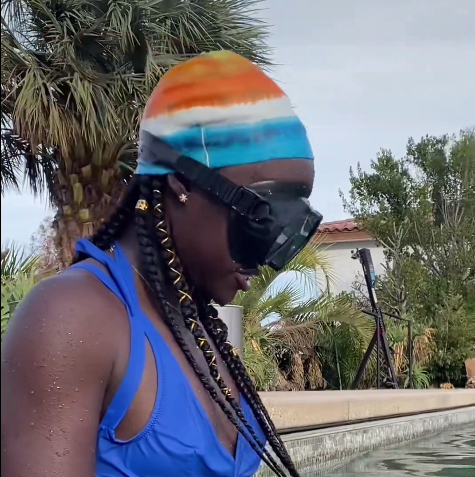 Black Panther: Wakanda Forever star Lupita Nyong’o has shown exactly how she improved her swimming skills for the sequel, and it does not look easy.

With much of the movie set underwater in a kingdom called Talokan and the actress admitting that she used to ‘swim like a panicked puppy’, she took on intense training to prepare herself.

‘It’s learning how to improve your breath capacity by performing tasks underwater, so I would carry these weights and walk on the floor of a pool,’ she told talk show host Jimmy Fallon.

Now she’s shared a video of exactly what she did, and it is slightly anxiety-inducing to say the least.

Titling the video ‘How I Trained to Swim in Wakanda Forever’, and commenting: ‘Swimming down to Talokan was not as easy as it looked’, it was made clear pretty quickly how hard this would have been.

Lupita wore a snorkelling mask while holding a weight close to her chest before she sunk underwater.

As she swims from one side of the pool to the other, she can only use one arm as the other holds onto the weight by her chest.

In another training exercise, she holds a weight in each hand as she ‘walks’ along the bottom of the pool after sinking.

She then is seen walking underwater with a weight in each hand and considering she’s totally underwater, the pool’s depth is daunting.

And she’s doing this all while holding her breath.

Lupita had to swim while holding onto weights

Don’t try this at home

As she eventually rises to the surface, Lupita joked that she ‘felt like a crawfish’.

However, she did make sure to write alongside her video that it was all ‘safely supervised by professionals’.

While on Fallon, Lupita also said that the training was about ‘overriding your panic button’.

‘It’s about trying to prolong that panic so that you can do more underwater.’

It might seem like she was required to do this for the film, but director Ryan Coogler and producer Nate Moore told The Hollywood Reporter last month it was her own idea.

‘She was so intent on being believably comfortable in the water. She wanted to be as much of an expert as possible. And it shows.

‘She was able to do things other cast members weren’t because she was just so intent on going above and beyond to make sure this character felt real.’