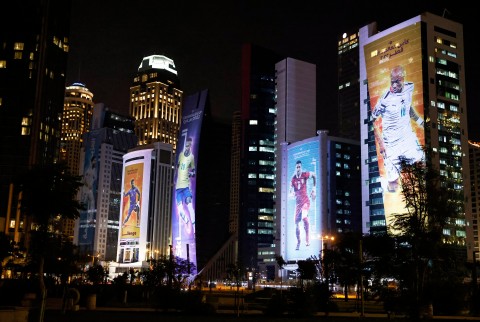 Eleven days to go then. Twelve years on from Fifa’s most creative gamble, here we are. Football’s biggest party is gathering its bags, packing its travel-size sun cream and long-sleeved tops, and getting ready to head to a small desert peninsular.

The main drag in Downtown Doha, the Corniche, has now been closed to all but construction traffic. Slightly concerning given such things were due to be packed away and tidied out of sight by September 21 ready to deliver a warm Qatar welcome.

A comfort, in one sense, to know that you can be the richest country on earth, throw £173billion at the problem (according to Qatar’s ambassador to Russia) and still find yourself with an essay crisis.

At this point, my fervent hope is just that everything goes ahead safely. Please let the set-up be limited but functional and the feeling of anxiety in the city be replaced with some of that enthusiasm so special to a World Cup. I mean, who wouldn’t feel anxious about the arrival of half the local population again in a place you know as being chaotic, heavy-handed and bureaucratic?

Keep watching. The question of whether Fifa’s Fyre Festival can get things done will be resolved over the next month or so. But the deep-rooted local problems will continue long after the end of this year.

Ninety per cent of Qatar’s population is immigrant. So of the three million people who live in Qatar, around 2.7million are away from home. Many come from the Arab world, the majority are people from the Indian subcontinent and from South East Asia, and a few, like me, come from Europe or America.

Over the last few decades Qatar has become a gathering place therefore for people from all over the world. Many — like one Lebanese woman I spoke to for my documentary [Inside the Qatar World Cup] — come in search of stability, and a better wage than they could get back home.

Vast numbers of workers brought in to build stadiums from Bangladesh or Nepal will have paid a huge fee back home to a recruiter to get themselves here. Dick Whittington would have come with his cat.

This means, whether we keep our tellies off for the whole World Cup or not, we all have a stake in the forces that create Qatar. I have skin in the game because I’ve lived there: I’m one of these people I’m telling you about. I care about those I’ve met and what happens to them, but you reading this – you’re these people too. You want a better life, and stability, and to support your family and be self-sufficient.

So, what now? I’m not suggesting we all dash out to the Gulf to start making friends, although that wouldn’t be a bad plan. What we can do at home is to have open conversations across age, class, race, gender, sexuality lines as often as possible. Listen to those who know what it’s like. Despite the damage that has been done by this World Cup, and the fact Qatar should not be hosting it, in some curious way the people of this nation are as representative of the world as any could be.

The football tournament will see 32 teams compete across 64 matches

On a practical level, the most important step now is compensation for workers who have suffered in the building of stadiums, in as wide a scope as possible. The most vulnerable need the most attention. Last week the country’s Labour Minister Ali bin Samikh Al Marri confirmed there would be no remedy fund. But Fifa is responsible for this World Cup’s location.

In the past it has allocated more than £225m for World Cup ‘legacy’ to former hosts including South Africa, Brazil and Russia. Fifa needs to be held to account here. Amnesty has specified a figure of at least £380m for migrant workers from an expected £5.2bn in tournament revenue. This is needed to support those who have tragically lost their bread-winning family members, or suffered debilitating conditions.